Nothing was going to stop Alex achieving his dream!

Despite losing the use of one arm due to a motorcycle accident, Alex Lees has recently graduated as a light vehicle mechanic and works full time at Von Bibra Service Centre. 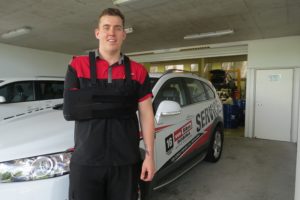 Despite losing the use of one arm due to a motorcycle accident, Alex Lees (pictured) has recently graduated as a light vehicle mechanic and works full time at Von Bibra Service Centre.

UPDATE 11th September 2020: Alex has won the Queensland Training Awards’s Apprentice of the Year 2020 and Equiy VET student of the year for SE Queensland region!

With a passion for cars and his beloved motorcycle, all Alex ever wanted to do was work as a mechanic. In 2014 he was over the moon to be given the opportunity to start his apprenticeship in light vehicle mechanics and everything was working out great.

However, even with the best laid plans, life can take a dramatic twist and after almost three years of his apprenticeship and with just three units of his study to go before completion, Alex was involved in a serious motorcycle accident, his bike careering over a cliff on a windy bend in the Gold Coast hinterland.

After two weeks in a coma and sustaining 18 injuries that required 12 separate surgeries and a long recovery ahead of him, Alex was given the news that he would never regain the use of his right arm.

Most people at this point would reconsider their career path but not Alex. It is obvious when you meet Alex that he is a ‘glass half full’ person and someone that focuses on the solution rather than the problem. With time on his side, for the next three years after the accident, Alex attended the gym and built up the muscles in his strong side, losing an incredible 50 kilograms in the process.

Alex’s passion for cars and mechanics never waned and through sheer persistence and a timely recommendation from a contact who worked with Von Bibra, he was given the opportunity to undertake a three month work trial in the service centre at Von Bibra.

During this trial Alex more than proved himself, impressively setting a new record for the most money earned by an employee and subsequently gaining the coveted ‘employee of the month’ title. It was an easy decision for Von Bibra to let Alex stay and complete his apprenticeship with them.

After recently completing his studies, the best news of all is that Alex is now a full time employee with Von Bibra in Robina.

“Being one-handed has not hindered me and I hope my story can encourage others to not let anything stop them from pursuing their dreams”, Alex further stated.

Managing Director for BUSY At Work, Paul Miles, stated “Alex is a true example of how a positive attitude is everything when it comes to fulfilling your ambitions. BUSY At Work is proud to have supported him in completing his apprenticeship and we look forward to following his career.”

More information about how BUSY At Work can support employers and job seekers with apprenticeship or traineeship support can be found on the BUSY At Work website or by contacting 13 BUSY (13 28 79).