Bradley ready to take on the best at national WorldSkills competition 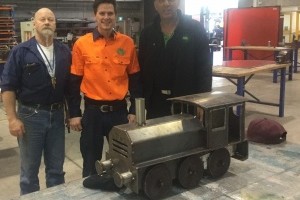 Pictured with Paul Galna, (left) and Ahmed Saloojee (right) Bradley is seen above (centre) with his first attempt at the national project.

Twenty year old metal fabrication apprentice, Bradley Clack is a young man determined to make his mark on the world.

Employed by OSMAC Group Training, the fourth year apprentice has been recently selected to represent Queensland at the 2016 WorldSkills Australia National Competition in Melbourne from 6 – 8 October.

WorldSkills is the largest trades and skills showcase in the country and this year nearly 500 young apprentices, trainees and students from all corners of Australia will compete in 50 categories for the coveted title of “National Champion”.

National champions can earn the chance to represent Australia at the 2017 WorldSkills International Competition in Abu Dhabi in the United Arab Emirates.

Bradley is now ready to continue his journey against the nations best in three days of intensive competition.

Earlier this month Bradley attended a national competition training camp at TAFE Queensland SkillsTech and made his first attempt at the national project which involved fabricating a scaled model of a train engine from scratch.

Over the next few weeks Bradley said he would be honing his skills to prepare for the national competition.

“The project is all about testing your oxy cutting and welding skills within the strict tolerances and specified time frame for the project.”

“In Melbourne I will have 18 hours to complete the train project which will also include fabricating a carriage without the use of grinders,” Bradley explained.

“We know Bradley has had to overcome some personal challenges and we are very proud of what he has been able to achieve and we know he will perform very well in the national competition. We wish him all the best and are certain he will do us proud,” Mr Saloojee said.

“Bradley has a strong work ethic and a determined attitude. He has worked extremely hard during his apprenticeship and we are keen to see him making the most of this opportunity.”

“His welding skills are of a very high quality and he is already performing at a trade level,” Mr Copson said.

If all goes according to plan Bradley said he hopes to complete his Certificate III in Engineering  Fabrication early next year.

BUSY At Work, CEO Paul Miles said BUSY was pleased to be the Australian Apprenticeship Support Network (AASN) provider for OSMAC Group Training and delighted to have signed Bradley into his apprenticeship back in 2013.

“We are proud of our reputation as specialists in apprenticeship support services and have developed a strong partnership with OSMAC Group Training over a number of years. We congratulate Bradley on his success and know he has a great future ahead of him,” Mr Miles said.