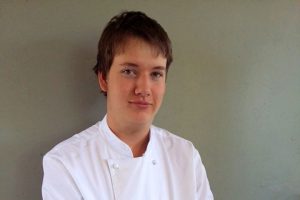 Brendan is about to embark on an exciting new career as an apprentice at celebrity chef Neil Perry's Rockpool Restaurant in Sydney.

First year commercial cookery apprentice, Brendan Austin has always been able to find his way around a kitchen.

Early years spent helping his mum prepare family meals is about to pay off in a big way with the former Warwick State High School student embarking on the opportunity of a lifetime.

The 17 year old has always had a passion for the food industry and is about to live out his dreams gaining employment in one of Sydney’s most acclaimed restaurants, Rockpool.

“Brendan has always had a love of food from a very young age and he has been keen to make his own way in the hospitality industry. Last year he was finishing Grade 12 and he wanted to gain more experience so I advised him to approach several celebrity chefs to show them his passion for cooking.”

“It is very rewarding to see him about to live out his dreams and we are very proud of what he has achieved so far,” Mrs Howard said.

Brendan began his career in 2014 completing work experience in a local Warwick restaurant. Following a year as a school-based apprenticeship at the restaurant, Brendan was keen to set his sights higher.

After contacting BUSY At Work, Brendan decided to send out several resumes to restaurants around Sydney, not really expecting a reply.

“We are delighted by the news that Brendan has chosen to leave his hometown of Warwick and work at one of Australia’s finest restaurants. With the right training and mentoring we feel confident Brendan will have a great career ahead of him,” Mrs Howard said.

Brendan said his future was now looking good and he was thankful to the support he had received from his parents and BUSY At Work.

“My parents especially have played an important role in helping me get to where I am today.”

“I am also thankful to Donna from BUSY At Work for helping me focus on my goals and supporting me through my apprenticeship so far,” Brendan said.

Paul Miles, CEO BUSY At Work said it was pleasing to see Brendan succeed in his chosen career.

“Brendan is just one of the many young people in country areas pursuing their dreams through completing an apprenticeship or traineeship.”

“Given his dedication and passion for his training, we know he will not only be a great asset to his employer but we look forward to seeing him achieve his goal of one day becoming a chef,” Mr Miles said.