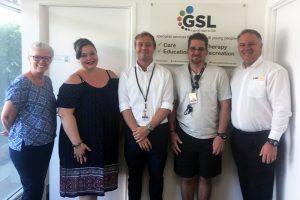 In September last year Daniel Newell was at a low point in his life. With a wife and two children to support, the future was looking very uncertain with Daniel unable to secure regular work to make ends meet.

After connecting with Jason Meyer, BUSY At Work’s Job Placement Officer for Smithfield, Mareeba and Atherton, Daniel was able to turn his life around and is now working full time in a new career which is not only financially rewarding but one he is passionate about.

In the lead up to meeting Jason, Daniel had been unemployed for two years and in his own words he had become “very discouraged with what the universe had thrown at him.”

In March 2016 Daniel thought his luck had changed after securing casual work at a furniture retailer. The work had involved a daily commute of more than an hour each way to Cairns. Come September the work had been reduced to 8-12 hours per week leaving Daniel very frustrated in the lead up to Christmas.

At this time Daniel was introduced to Jason who sat down and discussed various employment options with Daniel.

“As Daniel had a Heavy Rigid truck license and an enthusiastic outlook, we canvassed a lot of tour companies and delivery companies in the Cairns region without success. I then began to discuss other opportunities with Daniel that he hadn’t thought of in the past.”

“Daniel’s interest was sparked when I started to discuss possible opportunities with an employer who performed community based support to young people who live with a disability.”

During the discussion Daniel became very interested and wanted to know more.

“I asked Daniel to carry out online research on young people who live with ADD, ADHD, Autism Spectrum Disorder as well as the company, A Good Start to Life (GSL).”

After an enthusiastic report back, Jason contacted GSL and arranged an interview for Daniel the following day.

“We assisted Daniel with some coaching relating to interviews and following a successful interview, Daniel attended an induction and commenced buddy shifts with GSL the following day,” Jason said.

Now nearly four months on, Daniel is working full time and very much enjoying his new career as a Youth Disability Support Worker with GSL.

GSL Senior Manager, Nettie Herselman said Daniel had fitted in very well with the team and the young people he works with.

“Daniel has proven to be a great asset not only to our organisation but more importantly to the clients that we have paired him with.”

“He has fitted in extremely well with his colleagues and has the heart and drive to give selflessly of himself and make a difference in the lives of people living with a disability,” Ms Herselman said.

Looking forward Daniel said he was ecstatic to be working in a field he was passionate about and delighted that his life had taken a new turn.

“Growing up in foster care and having children of my own, I feel I can relate to some of the issues facing young people with a disability.”

“I have learnt that even in the face of adversity, through perseverance and the wonderful assistance I have received from Jason at BUSY At Work, you can conquer any bad situation,” Mr Newell said.

BUSY At Work CEO, Paul Miles said Daniel was an inspirational young man who had achieved some huge milestones during the past four months.

“At BUSY we know how important it is to empower job seekers with the skills, ability and confidence to try a new career path and embrace their own future.”

“We are excited that Daniel has been able to overcome challenges in his life and find a career path he is truly passionate about,” Mr Miles said.