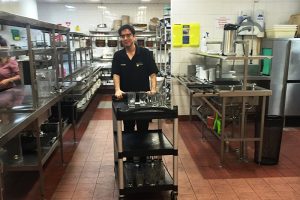 It’s been a whirlwind six months for Hotel Houseman Juan Concha since he first connected with BUSY At Work Project Coordinator/Mentor, Valerie Osburn.

During that time Juan’s confidence has grown in leaps and bounds to the point where he now has a part time job and is well on the way to completing his Certificate III in Hospitality.

Such is his remarkable progress Juan has now been nominated for the Queensland Training Awards 2017 Equity VET (Vocational Education and Training) Student of the Year Award. The award recognises people who have overcome significant barriers or disadvantage to effective participation in vocational education and training.

Valerie said Juan had been unemployed since 2012 so undertaking his Certificate II in Hospitality was a major challenge.

“Juan had initially linked with BUSY as a participant in the Queensland Government’s Skilling Queenslanders for Work initiative called TrainUP.

“He had a lot of anxiety and self-doubt, but once he realised that he was more than capable of working to a high standard, his confidence and enthusiasm grew.”

“Through recognition of his own abilities and the support from BUSY, his classmates and the trainers from Registered Training Organisation, Smart Skill, Juan has now been able to fulfil his dream of working in the hospitality industry,” Mrs Osburn said.

Following a successful interview with Australian Hospitality Services (AHS) Juan secured a job as a houseman with the Marriott Hotel in South Brisbane in December last year. Last month he transferred to the Swiss-Belhotel Brisbane and has continued to excel in his new learning environment.

Since starting his new role Juan has been kept busy learning about the health and safety standards associated with good housekeeping, handling requests from hotel staff as well as furthering his knowledge on functions and reception.

Juan said the past six months had given him a really good overview of the different components that make up a successful hotel.

“I really appreciate being able to develop real world skills. The hospitality course combined with the practical tasks and the support provided by my classmates, trainers and mentors has really made a difference in helping me get back into the workforce after several years of being unemployed.”

“I would like to encourage others not to give up on their dream, and if you face challenges one day at a time, pretty soon you will be able to overcome anything,” Mr Concha said.

As for the future Juan’s confidence and financial situation has improved so much that he has now booked a holiday to visit his sister in London later this year.

“This is something I would never have been in a position to do prior to completing my training and gaining a part time job,” Mr Concha added.

“We congratulate Juan on being nominated for the 2017 Equity VET Student of the Year Award and in being able to overcome any the challenges thrown at him.”

“We are also delighted to be delivering the Skilling Queenslanders for Work TrainUP program and to provide support for disadvantaged job seekers and those from culturally diverse backgrounds,” Mr Miles said.

Skilling Queenslanders for Work provides skills development, training and job opportunities to unemployed, disengaged or disadvantaged Queenslanders through a suite of targeted skills and training programs.