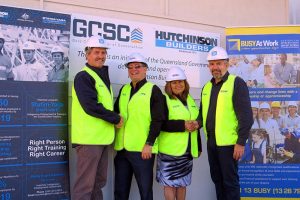 BUSY At Work is proudly supporting a new employment program which is producing some excellent results in building Indigenous careers in the construction and building industry.

“We have been working with Hutchies since January this year to deliver mentoring support and career planning to eligible Indigenous apprentices, trainees and their employers within the construction industry.”

“This support has included face to face and online support for the apprentice and employer, tailored mentoring support, creating work plans and providing information and advice on workplace issues,” Ms Donnelly said.

Robyn said the mentoring support would focus on at least their first six months of employment.

“Statistics indicate that apprentices who received specific mentoring support particularly in the early stages, were up to 15% more likely to complete their apprenticeship than those who were not part of a mentoring program,” Ms Donnelly added.

“Hutchies responded to an invitation from the Federal Government to some of Australia’s largest corporations to be part of the EPI. The government has set a bold target of 20,000 more Indigenous Australians to be employed in the private sector by 2020.”

“As part of this Hutchies has committed to placing 350 Indigenous job seekers into employment within the construction industry through Hutchies and our subcontractors and suppliers by 2019.”

“We are also committed to increasing our own workforce to at least four percent within this time.”

“We are well on target to achieving this goal with 175 Indigenous Australians in employment through the program,” Mr Kucks said.

With a turnover of approximately $2.2b this year in construction projects from Cairns to Hobart and across to Darwin, Mark said a major focus of the program was on employing apprentices particularly in skill shortage trades such as bricklayers, plasterers, tilers and painters.

Mark said the success of the Statim-Yaga program was based on retaining people in the program and creating lifelong opportunities for Indigenous people.

“We don’t see this as getting 350 people into jobs. We are here to change people’s lives and in turn their family’s lives, giving people the opportunity to develop lifelong careers in the construction industry,” Mr Kucks said.

“Through our construction schools at Yatala, Gold Coast, West End and Toowoomba, and with partnerships like BUSY At Work, we hope to further source more employment opportunities for Indigenous people with ours and other subcontractors and suppliers to provide Indigenous Australians with genuine career paths.”

“Our motto is to provide the right person, with the right training, for the right career,” Mr Kucks said.

“The Statim-Yaga program demonstrates why Hutchinson Builders is so well respected within the construction industry and BUSY is very proud to be working alongside them to make the program’s vision a reality,” Mr Andrews said.

For more information visit busyatwork.com.au/statim-yaga or contact Robyn Donnelly on 0417 875 005