Ryan ready to take his horticultural career to the next step 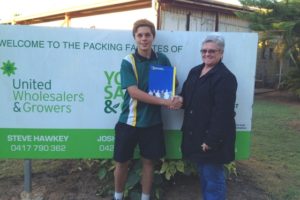 Former Kepnock High (Bundaberg) student Ryan Claridge is a young man on a mission determined to make his own way in the world.

The enthusiastic and energetic 18 year old has just completed his second qualification, a Certificate III in Surface Extraction which he hopes will help him gain employment in the mining industry.

BUSY At Work Industry Training Consultant, Betty Lappin said it was great to see such a young person achieving his career goals and ready to take his budding career to the next level.

“We signed Ryan up to his school based apprenticeship in May 2015. At the time Ryan was only 15 and in Year 10 but he already had a very good idea of what he wanted to do with his life.”

“Ryan always showed total commitment to his Certificate III Horticulture right from day one. He completed all his training blocks on weekends and through the school holidays and was a natural fit for farm life,” Ms Lappin said.

“Ryan was always willing to learn the underpinning knowledge and showed great dedication to his studies. He has progressed very quickly and we know he will have a great career ahead of him,” Mr Bielenberg said.

Now working as a machinery operator for United Wholesalers and Growers on a farm near Childers, Ryan said he couldn’t be happier with his new role.

“My dad always worked on small crop farms so I got to learn a lot from him growing up,” Ryan said.

Following his more recent studies in mining surface extraction, Ryan is keen to further his career as a production operator in an open cut mine.

“Working as a horticulturist or agronomist at a surface cut mine is a natural progression for me and I am keen to see where my career my take me in the future,” Ryan added.

Ryan said he had kept in close contact with BUSY At Work Industry Training Consultant, Betty Lappin and was thankful for the ongoing support BUSY had provided over the years.

“When I was nearing the completion of my horticultural studies I rang BUSY to ask for assistance in taking the next step towards the mining industry. They have really helped me set up my career and I am grateful for the support, advice and mentoring I have received,” Ryan said.

BUSY At Work Managing Director, Paul Miles said Ryan was an exemplary student who had shown great commitment to his work and studies.

“Being strong advocates for apprenticeships and traineeships we congratulate Ryan on a successful start to his career.”

“Ryan has demonstrated the diligence and commitment to perform at a high level and I have no doubt that Ryan will continue to excel in whatever direction his career takes him,” Mr Miles said.