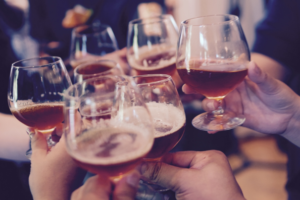 As the end of the year approaches it’s easy to get excited about the upcoming silly season.

Eventbrite have reported that Aussie businesses spent an average of $9,722 on their Christmas celebrations last year. On the more decadent end of things, 13% of businesses were said to have spent between $10,000 and $100,000, while 4% dropped more than a whopping $100,000 on their festivities.

However, for business owners, party spending isn’t just excessiveness for the sake of excessiveness. 85% of employers surveyed by Eventbrite said that their Christmas party had a positive impact on staff morale and was an important way to keep them motivated.

While the existence of staff parties is remaining stable, the nature of the celebrations is changing. In recent years there has been a push towards more creative ways to send off the year rather than the typical office party. There have been themed parties, scavenger hunts, escape rooms, river cruises and more. These functions are now seen as a way to invest in hardworking staff and their payoff has resulted in a more nuanced approach to party planning.

What will you do this year to celebrate? Read on to find out about some of the best Christmas parties.

Stories of their yearly tradition has resulted in the internet crowning Flight Centre as the best travel company in the world. While the setting of the celebration may not seem spectacular- it takes place in their head office- it’s what goes on within that makes the legend so spectacular. It’s a 60m long slip ‘n’ slide, lined all the way with cheering spectators as staff in silly costumes dive in for glory and fame. The scenario looks so absurd, it has people comparing it to the movie Wolf of Wall Street. The tradition remains strong even as one participant ended up in hospital a few Christmases ago.

Check out some videos here.

Merivale is responsible for some of the best pubs and bars around Australia, so it makes sense that this hospitality juggernaut also puts on a hell of a Christmas party for their staff. Last year they shut down all 49 venues so that 3,000 staff members could be transported to a ‘secret outdoor location’. What ensued was what you would find at a top commercial music festival; food, drinks, carnival rides and loads of DJs and live music. The party was reported to cost the company $300 per person, putting the total cost at about $1 million.

Check out a video here.

They have a lot of insight into what makes a great Christmas party, so it’s only natural that they’ve held innovative celebrations for a while. Even as far back as 2014 they decided to stay away from the classic drinks and music formula of a staff function and instead opted to book for a group cooking event at the Melbourne Food and Wine Festival. It’s the type of celebration that seriously reflects their brand and one that makes for a unique experience.

Speaking of on-brand, Sydney-based pet-sitting site Mad Paws decided to go all out one year with a beach party for their Christmas celebrations- for both staff and their pets. There was music, costumes, a barbecue, and of course treats for all their furry friends.

While not taking place in Australia, it’s not a stretch to imagine some big Aussie companies eventually following suit. Last year this creative agency based in England sent their entire staff to Spain for their Christmas party, paying the cost for flights, accommodation and two dinners.