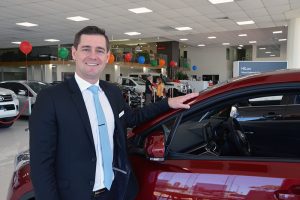 Having commenced his career as an apprentice motor mechanic, Leroy is a strong advocate for apprenticeships and BUSY At Work’s new GC101 campaign to recruit more apprentices in the trades.

“Apprenticeships are the backbone of the Australian economy and an integral part of our changing industry.”

“At Grand Motors we are always keen to hire passionate young people who are looking to build a career in the motor industry.”

“There is so much more progression in the industry now. If you love cars and love learning you have the opportunity to go anywhere in the world and get a job.” Mr Dunne said.

Leroy’s personal journey began in 2000 after completing work experience at the end of Year 10.

“Having loved cars since I was a kid I let my parents know I wasn’t going back to school and was offered an automotive apprenticeship with a small country dealership in Eden.”

Throughout his four and a half years there Leroy not only excelled in his apprenticeship but was able to cut his teeth on all aspects of the dealership.

“You get to wear a lot of hats when you are in a small dealership. When the Service Manager was away I’d step in and do that role. I learned everything from parts to sales and it proved to be a good grounding for what was to follow.” Mr Dunne added.

After moving to the Gold Coast in 2004 Leroy spent a short time selling real estate before joining Grand Motors as a Service Supervisor at Southport.

Before too long Leroy was on the move again and was promoted to Service Manager of the Harbour Town satellite branch of Grand Motors.

“There were a lot of challenges initially as we had only two hoists and one service desk but over the years we were able to grow the branch to the point where we had 11 hoists and 15 staff.”

“It proved to be a great learning curve as we learned to deal with increased technology and changing customer demands.”

Following his success at Harbour Town, Leroy became the New Car Sales Manager at Southport in 2014 where he is responsible for managing the new car department.

Having now been in the industry for 16 years Leroy remains very passionate about the future direction of the industry and the opportunities opening up for young people who have a passion for cars.

“This is an industry that is constantly changing. We have to change as society changes. Some brands are moving more into hybrid technology and customer’s buying habits are constantly evolving.”

“It’s important that the apprentices of today have a passion for learning new things. It’s not just about having good hand skills but being able to communicate with customers and being committed to lifelong learning.”

“The motor industry is a great industry to work in and it is important that we have young automotive technicians coming through who are willing to take up the challenge and be part of an exciting new future,” Mr Dunne said.

BUSY At Work, Managing Director Paul Miles said Leroy’s career demonstrates the opportunities that are available for young people who are prepared to follow their passion and choose an apprenticeship as a career pathway for the future.

“We are committed to provide opportunities for young people and urge local businesses to get behind our GC101 campaign and take on a new apprentice or trainee.”

“Currently there are over 600 apprenticeship and traineeship qualifications available and we are committed to make the employment process as easy as possible for businesses,” Mr Miles said.