On International Women’s Day we think it’s a great time to reflect on bridging the pay gap between men and women!  Providing more opportunities for women to enter non-traditional roles is helping to achieve this and as it turns out, it’s not only great for women, it’s great for our economy too. 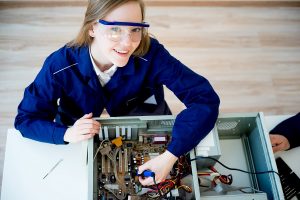 According to a report In 2012 by the Grattan Institute, they found that if there were an extra 6 per cent of women in the workforce, we could add up to $25 billion, or approximately 1 per cent, to Australia’s Gross Domestic Product (GDP).  The Organisation for Economic Co-operation and Development (OECD) also estimates that closing the gender participation gap by 75 per cent could increase growth in Australian GDP per capita from 2 per cent per annum to 2.4 per cent.  A significant impact for all Australians!

Women currently make up just 3% of non-traditional roles in Australia but what exactly is a non-traditional trade? A non-traditional trade is defined as one where women represent less than 25% of apprentices or workers. These include horticulture, automotive, building and construction, manufacturing, butchery, boilermaking, electrical, carpentry, plumbing, engineering, information technology, commercial cookery and more!

BUSY Sisters is a new initiative funded by the Federal Government, Office of Women to support women entering non-traditional roles and is playing its part in bridging this gap by providing a mentoring support service for newly entering apprentices in non-traditional roles. Mentoring is provided by female mentors who have had professional careers in non-traditional roles themselves and who understand the particular challenges that women navigating their way in a male-dominated workforce may confront. The program offers six months support with weekly catch-ups and access to helpful informational resources, along with a supportive network of other women starting out in non-traditional trades.

Tara is a recent participant of BUSY Sisters mentoring program and is a new, mature age Apprentice completing a Certificate III in Electrotechnology (Electrician) and a Certificate III in Instrumentation and Control. Previously working as an events manager and in hotel management, Tara also had I.T skills and decided to change careers due to uncertainty in employment.  She was looking for more independent, self-employment through gaining a trade and her previous I.T and computer skills inspired her to take on a trade as an electrician. Describing herself as a logical thinker, an important quality for someone undertaking electrical work, Tara is an excellent example for other women, regardless of their age, who are considering entering a trade. She says she is gaining invaluable support through her mentor at BUSY Sisters.

Just out of school, Elly had always wanted to do a trade and during school she undertook a school-based traineeship working one day a week for Reece Plumbing. She is now completing her plumbing apprenticeship with Tom Moore  Plumbing in Beaudesert QLD.  Elly is also receiving mentoring support through BUSY Sisters and believes the network of women is helping her to grow confidence in the workplace  and being ambitions, it is also helping her to work on her leadership skills.

Both Elly and Tara are trailblazers for women entering non-traditional trades, helping to bridge the pay gap and make a positive difference in workplaces in Australia.

This International Women’s Day we’re tipping our ‘hard hats’ off to women like Elly and Tara!

If you are a woman about to enter a non-traditional trade and would like mentoring support through BUSY Sisters, you can find out more at www.busysisters.com.au