Cairns set to be the centre for tourism expansion 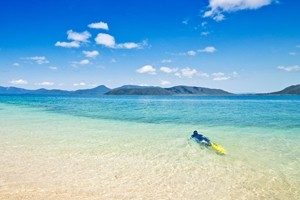 It's easy to see why Cairns is popular with tourists.

People love to visit Queensland. Whether they’re travelling here by plane from overseas or by car through neighbouring states and territories, they all have one thing in common: they’re helping to build the economy and keep people employed across a range of different industries.

There are apprenticeship opportunities available in a range of supporting industries. Training for the hospitality industry and all it has to offer can be an ideal place to start a career. Not only are there already a number of chances for employment, with the population rising and tourism increasing, hospitality is likely to be just as vital in the future as it is now.

Increasingly, Queensland continues to be a focus, and with Cairns hosting an upcoming tourism conference, it’s a trend that’s set to continue in the coming years.

All eyes on Cairns as it prepares for an international conference

Like a number of other initiatives being rolled out across a range of industries in Queensland, this latest tourism focus is set to ensure that every bit of the Sunshine State has a chance to benefit from the growing number of visitors. This new attention on regional areas means there will hopefully continue to be a range of job and apprenticeship opportunities outside of Queensland’s main centres as well as within them.

In late August, Cairns will host the Premier’s Connecting with Asia Forum which will allow around 400 leaders from the tourism industry to all come together with ministers and other stakeholders to discuss the various opportunities inherent to the region.

According to the Member for Barron River, Craig Crawford, there has already been notable growth in the state’s Far North, so a concerted effort such as the one provided by the Forum is likely to offer further benefits for the region. Mr Crawford also acknowledged how valuable the Asian market will be in the future as well.

“We have seen record growth in tourism in the Far North and this forum is a great opportunity for us,” he began.”Here in Tropical North Queensland, tourism supports 23,500 jobs and contributes more than $4.7 billion to our local economy.

“That’s why it is so important for Cairns to host the Premier’s Connecting with Asia Forum to make the most of the opportunity to capitalise on growth from Asia, to create a better economy and more jobs for people in the Far North.”

Domestic tourism just as important to the future

We’re a little bit isolated in this part of the world. While Asia is close by, other major destinations such as Europe and United States are thousands of miles – and therefore thousands of dollars – away. As alluring as these destinations are, Australia is still just as attractive a holiday destination for people who grew up here. Coupled with the growing rate of international visitors, domestic holiday-makers are providing a vital boost to regions across the state.

Two-thirds of Queenslanders chose to explore more of their home state.

A Roy Morgan Research study from earlier in the year found that a massive amount of Australians stay on home shores for their holidays.The organisation found that just over 10 million Australians had their last holiday here, making it a valuable market for the country’s tourism professionals.

As the report found, two-thirds of Queenslanders chose to explore more of their home state when they last went on holiday, with both the Sunshine Coast and Gold Coast marked as the destinations of choice.

Roy Morgan Research suggested that the main reasons for these holidays was not just due to the various attractions within each state, but for time and practicality reasons as well.

Tourism is a health and growing industry in Australia, and whether people are coming by land, sea or air, it stands to remain a vibrant place to find jobs.