Charlee Excited to Pursue Her Passion for Painting 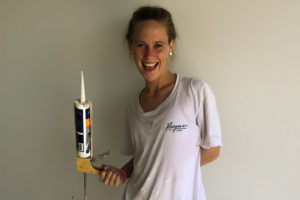 Twenty three year old Charlotte “Charlee” Chaplin is living proof that you’re never too old to change careers and follow your dreams into a vocation you are passionate about.

The former barista and housekeeper always had it in the back of her mind that she wanted to be a painter since she left high school.

“For several years I had been thinking about doing painting and decorating as a trade but couldn’t bring myself to quit a full time job to go on apprentice wages.”

“When I became unemployed I spoke with a friend of mine, Carlos Pritchard, who runs a painting business here on the Sunshine Coast about the prospect of taking me on as a mature age apprentice.”

“Having previously taken on female apprentices, Carlos was happy to give me a go and I signed up through BUSY At Work on 13 February,” Charlee said.

Now studying for her Certificate III in Painting and Decorating, Charlee is excited to be working in her desired trade.

“It’s all pretty much hands on at the moment and I’m learning a lot about the different types of paints, preparation, masking up and how to use rollers and brushes.”

“It’s a great feeling to see how it all looks after you’ve completed the job and see the results of your work,” Charlee said.

Business owner Carlos Prichard was full of praise for Charlee who had shown a positive attitude and a willingness to learn during the initial stage of her apprenticeship.

“Charlee has a steady hand and her attention to detail is excellent. She applies herself well and has the potential to do well in this trade,” Mr Prichard said.

While only just starting out in her new career Charlee already has big plans for the future saying she would like to own her own business one day.

“There are not a lot of women in the trade and I hope I can set an example for other women who might be considering this as a career option,” Charlee added.

“As an industry around 10% of the apprentices I train are women who want to pursue a career in painting.”

“It allows women to move into more niche market areas such as interior design and wall papering and is less physically demanding than trades like fitting and bricklaying.”

‘‘Good painters understand colour harmony and know how colours and tints will look when they are next to one another.”

“When a home owner walks into a home to see the finished product there is always great job satisfaction in knowing you have created something nice for the consumer so it’s a very satisfying trade for both young men and women,” Mr Gorman said.

BUSY At Work Managing Director, Paul Miles said Charlee’s positive attitude and enthusiasm for painting and decorating had set a great example for other young people wanting to follow their career aspirations.

“Charlee has demonstrated that she has the confidence and ability to succeed and BUSY At Work are delighted to be supporting her in her chosen career.”

“With her dedication and commitment to her work I have no doubt that Charlee will continue to excel,” Mr Miles said.