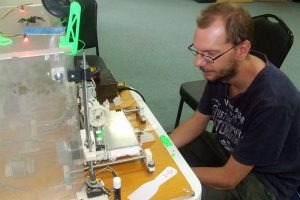 BUSY At Work is supporting a creative Work for the Dole project in the Mackay region which is not only providing participants with new job skills but helping local businesses recycle and reuse computer and electronic equipment.

BUSY At Work, Work for the Dole Coordinator, Kristy Gostelow said BUSY was working in partnership with Community Solutions to match the job seekers with the project for non-profit welfare organisation, New Life Community Services.

Kristy said the recycling project was the brainchild of Director, Frank Mason.

“Frank approached a local recycling centre in Mackay with a view to helping unemployed people in a project to recycle computer equipment.”

“E-Hub Mackay and E-Hub Sarina were then created to allow local people and businesses to donate their used photocopiers, printers, scanners and electronic equipment rather than placing it in the dump as landfill,” Ms Gostelow said.

Around 30 WfD participants have been involved in dismantling computers, photocopiers and printers over the past five months and helping to rebuild them into fully functioning 3D printers.

Kristy said the project was about helping job seekers learn new skills that will assist them with finding paid employment.

“The job seekers really do enjoy the working environment and now that they have their first printer operating it’s very exciting for all concerned.”

“We at BUSY feel this is a worthwhile activity because it also helps the Mackay business sector by getting rid of their unwanted computer equipment,” Ms Gostelow added.

Frank said the Mackay centre had now managed to recycle more than 15 tonne of equipment since it began operation in October last year.

“We recycle more than 95% of donated materials and in fact we are now using the first 3D printer we constructed to build new 3D printers.”

“This is a social enterprise rather than being about making money. The participants can see something for their efforts and get to learn new skills through using a wide range of tools including screw drivers, allen keys and wire cutters.”

“We’ve even had people from the project go on to get jobs in other forms of recycling,” Frank added.

As for the future, Frank said he was keen for the centre to be able to produce enough printers to send to schools and universities for students to use in trade and technology classes.

Job seeker Mark Furling said he was excited to be part of the project and hoping it might lead to a full time career in the information technology industry.

“Ever since I was a youngster I’ve enjoyed electronics and learning about new software packages.”

“It’s very hands on and helps keep me up to date with what is happening in the IT world,” Mr Furling said.
BUSY At Work CEO, Paul Miles said BUSY was pleased to be an active participant in this Work for the Dole initiative.

“We are excited to be supporting this project which is not only helping the participants to become job ready but providing them with valuable learning skills for the future.”

“We are keen to expand our role in the Mackay region and know that projects such as these can generate real employment outcomes for local job seekers,” Mr. Miles said.

BUSY At Work are the jobactive (WfD) Coordinator for the Mackay employment region and the New Life Community Services E Waste Project is just one of a number of exciting projects underway in the Mackay region.