Gemma excels in diesel fitting apprenticeship with support from BUSY 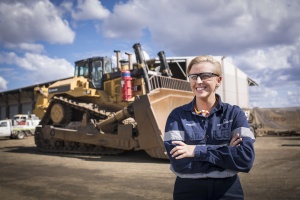 Queensland School Based Apprentice of the Year Gemma Hartwig is well on the way to achieving her goal of becoming “the best diesel fitter I can possibly be”.

The seventeen year old began her apprenticeship as a school-based apprentice in 2013 while a student at Our Lady of the Southern Cross College in Dalby.

Since then her career has excelled and for the past two years she has been employed as a fulltime apprentice diesel fitter with mining services company, Ostwald Bros in Dalby.

Gemma said she had initially planned on becoming a hairdresser but when her career counselling results indicated that she would be more suited to diesel fitting she decided to give it a go.

“After a week of work experience with Ostwald Bros, I knew working in a trade was what I really wanted to do, which motivated me to undertake a school-based apprenticeship,” Gemma said.

BUSY At Work Mentor Officer Nicole Clifford, said BUSY had continued to provide mentoring support for Gemma throughout her apprenticeship.

“We are very proud of Gemma and what she has accomplished so far during her apprenticeship. It’s been a great pleasure to support her throughout her journey and we are looking forward to seeing what the future holds for her,” Ms Clifford said.

As a valued team member of Ostwald Bros mechanical maintenance team, Gemma said she would like to see other females follow in her footsteps.

“I knew working in a male dominated trade was going to be a bit daunting but I’ve always had a positive attitude and believed if you have a passion for something then you can achieve whatever you want.”

“I really enjoy working on the heavy earthmoving machinery and trucks and learning about engine rebuilds. A lot of the tradesmen in the workshop are willing to share their knowledge and teach me what I need to know. It’s all very hands on and there’s something new to learn each day.”

Gemma said she was grateful for the support she had received from her family.

“Mum and dad have been very supportive and have consistently encouraged me to realise my full potential.”

“My dad owns a cabinet making business so I grew up doing woodwork but it is mechanics where I want to be now,” Gemma said.

Ostwald Bros Group Plant Manager Brian Ostwald said Gemma had shown great dedication and a high level of commitment towards all of her responsibilities.

“Gemma works well independently and has displayed great persistence when problem solving and working through complex tasks,” he said.

After winning the Queensland School Based Apprentice of the Year Award in September last year Gemma has relished the opportunity to be a judge at this year’s regional awards.

“It’s been a great experience seeing how things work from the other side and learning about what the judges are look for,” Gemma said.

BUSY At Work CEO, Paul Miles said Gemma had set a great example for other young people who might be considering undertaking a mechanical apprenticeship.

“Gemma has shown herself to be very capable and diligent and is proving to be a great asset in the workplace. Her commitment and dedication to her apprenticeship ensures she has a bright future ahead of her,” Mr Miles said.

To find out more about the Queensland Training Awards go to www.qta.qld.gov.au