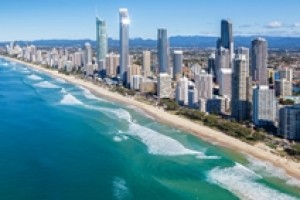 The Queensland government has announced a $5.5 million funding package for tourism and events, with the Gold Coast set to receive the largest proportion of the investment.

Minister for Tourism and Major Events Kate Jones said the money would go towards 17 projects across the state, helping boost the industry and jobs in Queensland.

“These projects will play a vital role in promoting the state’s destinations, driving visitation, supporting jobs and fostering community pride,” she explained.

Funding for the Gold Coast will be spent on a marketing campaign to target crucial interstate visitors from Sydney. The government will also use a portion of the investment to promote Gold Coast events.

“The events project will leverage off the It’s Live! in Queensland marketing platform in the lead up to the 2018 Commonwealth Games and highlight the destination’s year-round calendar of events, encouraging residents in Sydney, Melbourne and New Zealand to visit,” Ms Jones stated.

The state government is set to provide $800,000 of the $1.6 million, while regional partners will cover the balance. The money is being provided under the Contestable Grants Funding Scheme, which is helping regional tourism organisations to take advantage of local opportunities.

While the Gold Coast will receive the lion’s share of investment, many other areas are also expected to benefit. Brisbane is set to spend more than $770,000 on regional initiatives, including nearly $120,000 for the World Science Festival Brisbane project.

Elsewhere, the Sunshine Coast has been awarded $180,000 and Fraser Coast has $175,000 worth of local initiatives lined up. The Sunshine Coast funding will attempt to expand on the recent Vacation Migration campaign, which encourages New Zealanders to visit the region using flights from Auckland.

Bundaberg, Gladstone, Townsville and Whitsundays are among the other popular tourism destinations due to receive financial assistance. Ms Jones said the state government is spending a total of $2.8 million for tourism package, with regional partners investing $2.7 million.

The campaign is therefore likely to boost employment across the state, which may offer more opportunities for tourism and hospitality traineeships in Queensland.

Last month, figures from Tourism Research Australia showed international visitor numbers appear to be on the rise in Queensland. Spending from overseas travellers climbed to $4.4 billion in the year to March 2015.

The Gold and Sunshine coasts welcomed 6 and 14 per cent more international tourists during the 12-month period respectively. Whitsundays saw a 13 per cent improvement.