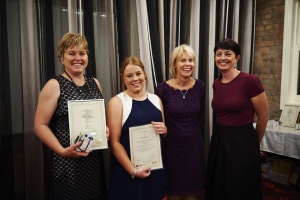 First year university student Janah O’Shea has always wanted to work with disengaged young people and in a few short years she has already shown herself to be a more than capable youth worker.

The born and bred Dalby resident is now studying for her Bachelor of Social Work at the University of the Sunshine Coast after spending the past two years at the Downs Industry Schools Co-op (DISCO) in Dalby. DISCO works with youth aged 13-24 to help them remain engaged in school, work, or further study.

Janah commenced with DISCO in January 2013 as a Trainee Youth Worker working with 10-15 disengaged young people in DISCO’s Youth Training Program. Showing maturity far beyond her years Janah then progressed to the role of Youth Training Program Coordinator when she completed her qualifications in June 2014.

Janah was full of praise for the support she had received through the QGC Strengthening Local Workforces Program. The partnership program between QGC and BUSY At Work was formulated to attract apprentices and trainees outside the resources sector while creating sustainable communities in regions such as the Western Downs, Gladstone, North Burnett and Banana Shire.

“With the coaching support from BUSY At Work’s Apprenticeship Support Officer I completed all of my modules on time. The regular visits helped me focus on my goals and I learnt some valuable communication skills particularly in the area of conflict management and teamwork.”

“I’ve always believed I could make a difference in young people’s lives. The training and practical skills I learnt at DISCO have put me in good stead for my university studies and I am looking forward to pursuing a career in social work in the future,” Janah said.

“Coming straight from school she was initially a shy young person but with the right training and support she showed great dedication and maturity and always worked well with the young people.”

“She has developed into a confident young lady and her efforts were rewarded when she was promoted to a supervisory role after only eighteen months in the job,” Mrs Callaghan said.

BUSY At Work CEO, Paul Miles said Janah’s positive attitude and commitment to making a difference in the lives of disengaged youth had set a great example for others wanting to follow in her footsteps.

“Through the support of the QGC Strengthening Local Workforces Program and her own hard work and dedication, Janah now has a solid foundation to succeed in her chosen career.” Mr Miles said.