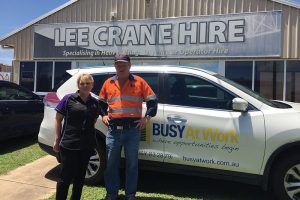 Australia's trend unemployment rate remained at 5.8 per cent for the fourth consecutive month.

Figures released today by the Australian Bureau of Statistics (ABS) estimated an increase of 37,400 more jobs from March to April 2017, although most of these were part-time. Full-time employment fell by 11,600 as part-time employment increased by 49,000.

Australia’s trend unemployment rate remained at 5.8 per cent for the fourth consecutive month.

“For almost 18 months, the trend unemployment rate has been relatively stable, at around 5.7 to 5.8 per cent” said Bruce Hockman, General Manager of the ABS Macroeconomic Statistics Division.

CEO BUSY At Work Paul Miles urged businesses to help ensure the future of our youth’s jobs by employing apprentices and trainees full-time.

“The unemployment rate for our youth is at 13 per cent and that’s too high.”

“While we understand part-time jobs in some industries such as retail and tourism will continue to grow, we can’t lose sight of our trades. Full-time positions in our trades using the Australian Apprenticeship system can provide stability for businesses and a much more robust economy for Australia’s future.”

“There’s some great incentives out there to help small to medium size businesses grow, particularly for regional Queensland.

“These include the Back to Work program, the extension of the Youth Boost and the $20,000 instant asset tax write off announced in the budget last week,” Mr Miles said.

The $100 million state government Back to Work program has so far supported 1,893 employers to hire 3,471 workers in regional Queensland.

According to Employment Minister Grace Grace local employers have so far received over $3.5 million in support payments with a further 1,494 applications pending approval.

Back to Work aims to give businesses the confidence to employ job seekers in Queensland regions, with a focus on disadvantaged job seekers and provide an economic boost to regions facing challenging times.

Eligible regions for Back to Work:

$20,000 Youth Boost payment is specifically targeted towards employers who hire unemployed youth aged between 15 to 24 during the eligibility period between 1 December 2016 and now extended to 31st of October 2017.

To learn more about apprenticeships, traineeships or the Back to Work ‘Youth Boost’ scheme, please call 13 BUSY (13 28 79).

Australian Bureau of Statistics
abc.net.au/news
Budget 2017 – $1.5 billion to increase apprenticeships and traineeships
Back to Work Incentives