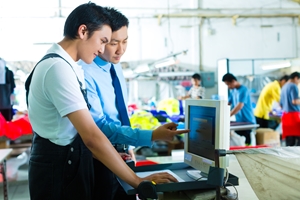 Apprentices may be more highly sought now the manufacturing sector has begun expanding.

The Australian Industry Group’s (AIG) Performance of Manufacturing Index (PMI) has risen above 50 for the first time since June 2011, indicating the manufacturing sector is in a state of expansion.

September saw the PMI at 51.7 points, an improvement of 5.3 points. A PMI above 50 signals that a sector is in a period of growth, while a reading below 50 indicates industry deflation.

After a two-year span of contraction, the increases in manufacturing activity are being credited to the lower Australian dollar and a fall in interest rates.

The growth in this sector is expected to continue after the Reserve Bank announced it would not be increasing the cash rate, preserving its 60-year-low of 2.5 per cent.

This news is encouraging for those seeking employment and apprenticeships in Queensland, as the employment sub-index has reached its highest reading since March this year.

This means that businesses within the Australian manufacturing sector began employing more workers over September, and the upward trend is forecast to continue as companies begin looking for staff and apprentices to cover recently acquired orders from new customers and contracts.

The PMI new orders sub-index also jumped 9.3 points in September to reach 53.6 per cent, its highest reading since July 2010.