Nathan set for a big future in the building industry 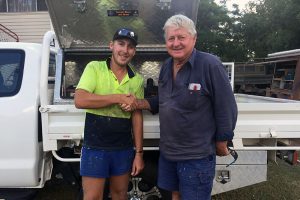 Twenty one year old Chinchilla local Nathan Black is not the sort of person who likes to sit around on weekends and play on his computer.

Chances are when his is not working flat out with his boss Lenny Vievers in his building construction business, he’ll be busy tiling the new laundry he has just renovated on his mum’s rural property.

While excited about having just completed his carpentry apprenticeship, Nathan still has his feet firmly planted on the ground and is keen to continue the learning process in a trade he is passionate about.

For Nathan completing an apprenticeship is just the beginning and he is the first to admit it hasn’t always been an easy ride.

“I’ve still got a lot to learn. Just because you’ve got your ticket doesn’t mean you are any better than the day before,” Mr Black said.

Nathan began his carpentry trade as a school-based apprentice in 2012 and after leaving Year 12 quickly signed up with a local Chinchilla builder.

Two years on Nathan found himself working at the local IGA after the builder relocated to Hervey Bay.

“It was a tough 12 months but I always knew I wanted to complete my trade. At the time I had mainly been building sheds but was put onto Lenny Veivers through the local butcher.”

“I found I had an instant connection with Lenny and was fortunate to be able to be signed up with him through BUSY At Work,” Mr Black added.

Since then Nathan hasn’t looked back and as well as completing his carpentry trade has picked up some additional skill sets in plastering, tiling, concreting and plumbing.

For those considering taking up a carpentry apprenticeship, Nathan was happy to offer some words of advice.

“When you’re new to a trade it’s important to come in with an open mind. The building trade is very ‘hands on’ and your heart has to be in it all the time. You can’t turn up to work and think you can have a lazy day.”

“I’ve met a lot of younger people who ask me how I know I want to do this. You don’t know in two days or two weeks but you have to be willing to put in the hard yards and give it a real go,” Mr Black said.

As for the future Nathan said he was keen to continue to work for Lenny and one day obtain his building sub contractor’s license.

After more than 40 years in the building game, Lenny Veivers is proud to be putting on his 22nd apprentice.

“Taking on an apprentice is definitely worthwhile. It’s been very rewarding to watch them grow in confidence and want to stay on well after they’ve finished their trade.”

“Because we do a lot of renovations in remote farming communities it’s not just about hanging doors. It’s about being multi skilled and learning all facets of the building trade,” Mr Veivers said.

Lenny said he was thankful for the support he had received through BUSY At Work.

“We have been working with BUSY since 2003 and they have always been prompt and efficient and made the signing up process very easy for us,” Mr Veivers added.

BUSY At Work, CEO Paul Miles said BUSY was pleased to work with local employers like Veivers Builders who continued to train apprentices and support young people in gaining a start in the building industry.

“BUSY At Work has always played a key role in growing apprenticeships right across Queensland and we are delighted that Veivers Builders has been able to take on new apprentices and provide highly skilled employees in the Darling Downs region.”

“We congratulate Nathan on the successful completion of his apprenticeship and know that he will continue to make a valuable contribution in the workplace,” Mr Miles said.