National Reconciliation Week is a reminder for all Australians to contribute to achieving reconciliation for our first nation’s people in Australia, prompting all of us to learn about our shared histories and cultures. 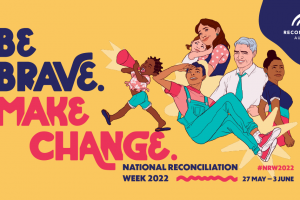 The week always runs from 27 May to 3 June as it coincides with two significant milestones in the reconciliation journey so far: that of the 27 May, 1967 Referendum which saw an overwhelming 90% of Australians vote to give the Australian Government power to make laws for Aboriginal and Torres Strait Islanders and recognize them in the census; and on the 3rd June 1992, Eddie Koiki Mabo’s court challenge which lead to the legal recognition of Aboriginal and Torres Strait Islander peoples as the Traditional Owners and Custodians of lands, and paved the way to Native Title.

This same year, 2001, which saw 300,000 people cross the Sydney Harbour Bridge as part of National Reconciliation Week which prompted other cities and towns across Australia to conduct bridge walks also.

At BUSY At Work, our vision for reconciliation with First Nations Peoples has its origins in our commitment to have more people in jobs, more people learning new skills, and more communities exposed to positive change, in partnership with employers and industry.

We recognise that a community-led, strengths-based approach that values the experience of First Nations Peoples is the best way to accelerate improvements in their life outcomes.

To make this vision a reality it is our intention to consult with First Nations Peoples to truly understand how we can work together to create opportunities.

BUSY At Work is driven by passion and commitment to make a difference by supporting Reconciliation through our commitment to the actions outlined in our ‘Innovate Reconciliation Action Plan (RAP)’ which re-enforces our genuine commitment to improve the lives of one of the oldest surviving cultures in the world and assist in driving social change.

Throughout our offices, through morning teas and group communications, we’re encouraging all of our staff this year to Be Brave, Make Change, to reach out and connect with our First Nations Peoples, and the opportunities we can provide to improve lives through career pathways, vocational skills, employment and financial independence.

The BUSY Group was lucky enough to have one of our former employees create an art piece to represent our journey. This artwork is displayed in many of our offices. 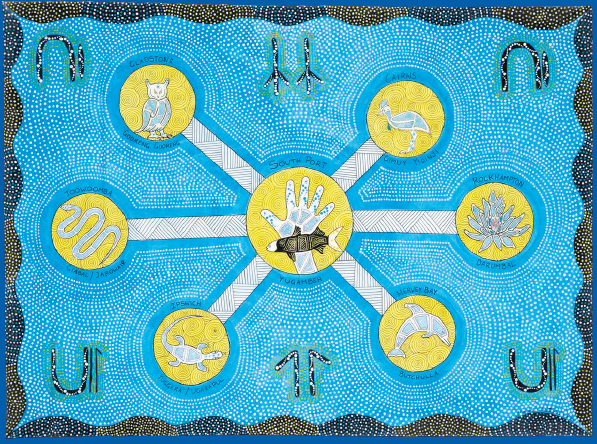 This is about the journey that BUSY has taken to get where they are now.

The black symbols represent the aboriginal men and women who had lived, worked, and looked after the land before our offices came to be where they are.

I have also painted a kangaroo and emu track to represent all the animals who walked the land before we began our journey.

The yellow circles are in a symbol that represents ‘meeting place’. For BUSY, this whole journey has been one big meeting place for everyone to come and meet with all people across the organisation to help them gain employment or start their pathway to success.

The biggest circle in the middle is a representation of Southport where the journey began for the BUSY staff with Martin Punch, our founding director’s hand print in the middle. Below Martin’s handprint is a sea mullet. The sea mullet represents the Yugambeh people.

While researching for my painting I got onto uncle Ted Williams and asked if I might be able to use his totem as a symbol for the head office. Uncle Ted asked if I could paint the sea mullet, as the sea mullet represents all the Yugambeh people because when the sea mullet would come in close to shore the people would go fishing and catch a big heap of fish to then take back and share with all the mob.

The other offices are represented through totems of the traditional owners of the land that they are situated. This is to show our respect and acknowledgement of the traditional owner. Every dot on this painting represents every worker and the individuals they have helped over the years, representing the hard work that has contributed to becoming such a great organisation.