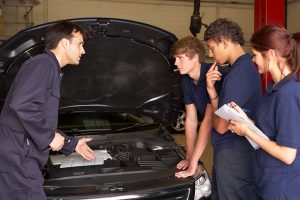 According to the National Centre for Vocational Education Research (NCVER) released yesterday the number of apprentices and trainees completing their training has increased to 61.4%.*

Across occupations, individual completion rates ranged from 72.9% for hospitality, retail and service managers to 42% for food preparation assistants.

“We know that about a third of all apprentices and trainees leave within the first year of starting their apprenticeship and traineeship, usually because of a change in their job situation”, said Dr Mette Creaser, National Manager, Statistics and Analytics.

BUSY At Work, Managing Director Paul Miles said the figures were positive. “It’s great to see the individual completion rates on the rise since the introduction of the Australian Apprenticeship Support Network (AASN) by the Australian Government in July 2015.”

“The AASN Gateway Services has a strong focus on getting the right people in the right jobs, through career assessing tools to gage the suitability and job readiness. Mentoring services for both employers and apprentices also contribute to increased completion rates,” Mr Miles said.

Included in the publication are the latest and projected contract completion and attrition rates, which suggest rates will remain steady for the next year.

NCVER has also released Apprentices and trainees 2016 — annual, a yearly summary of apprenticeship and traineeship activity. It shows that 2.2% of Australian workers were employed as an apprentice or trainee as at December 2016, a slight decline from the previous year.

This work has been produced by NCVER on behalf of the Australian Government and state and territory governments, with funding provided through the Department of Education and Training.

* Individual completion rates for apprentices and trainees in all occupations commencing in 2012.