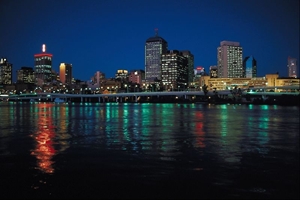 The Brisbane skyline is set to change with the construction of the 34-storey 180 Brisbane office tower.

The Brisbane CBD will welcome a new $300 million 34-storey office tower come 2015, with the 180 Brisbane to set a new standard for office towers in the city.

Japanese developers Daisho Group launched the project in late April, with the tower incorporating eco-friendly design that will set a “new standard of sustainability”, targeting a 6 Greenstar GBCA rating.

180 Brisbane was reported by the Courier Mail to be the first commercial high-rise building to be built speculatively in Brisbane since the start of the global financial crisis, with Daisho Group president Katsumi Tada stating that he believes the building will be another “high quality addition to the city”.

The multimillion dollar project could also present opportunities for apprenticeships in Brisbane over the next two years of construction.

The office tower is situated in a prominent CBD location, sitting in close proximity to public transport, retail amenities and banking.