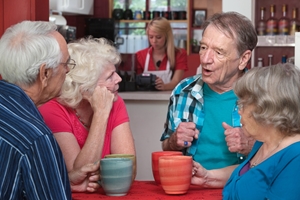 Cafes and restaurants did particularly well in January.

Queensland’s retail sector continues to show signs of improvement, with turnover growth in January 2015 recorded at 1.2 per cent.

Data from the Australian Bureau of Statistics revealed the state’s performance was among the best nationwide – only Tasmania’s 1.9 per cent jump in turnover was higher. The figures mean Queensland has now experienced 2.4 per cent retail growth over the last year.

Elsewhere, Western Australia edged forward 0.1 per cent and New South Wales stayed the same with zero growth. The ACT, the Northern Territory and South Australia fell by 1.9, 1.8 and 0.1 per cent respectively.

As Queensland retailers celebrate the news, people seeking job opportunities in the state are also likely to be pleased. For example, industry growth could result in more traineeships in retail becoming available.

The Australian Retailers Association (ARA) said January was a mixed bag of results, with a strong showing at the beginning of the month that gradually tailed off by the end.

“Boxing Day was huge for retailers this year and many consumers carried on bargain hunting well into the first half of January,” he stated.

The ABS data showed cafes, restaurants and takeaways were among the biggest gainers for the month, growing 2 per cent. However, department stores recorded the largest growth at 2.2 per cent.

“While food retailing suffered during January (-0.7 per cent) due to consumers often being away from home and choosing to eat out instead, the cafes, restaurants and takeaway food services sector enjoyed a nice boost in sales,” Mr Zimmerman added.

“As always at this time of year, Aussies are out and about socialising with friends and family at their local eateries.”

He added that a post-Christmas drop-off in discretionary spending resulted in clothing, footwear and accessories only experiencing a small rise of 0.1 per cent. Nevertheless, this segment enjoyed 5 per cent growth year on year.

“It will be interesting to see the results of February retail sales when this information is released next month, as Valentine’s Day usually provides retailers with another welcome boost in sales,” Mr Zimmerman commented.

The performance of the retail sector could be further strengthened in the coming months as the effects of the latest Reserve Bank of Australia interest rate reduction become evident.