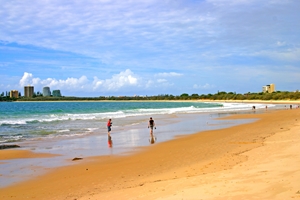 Approximately 30,000 jobs will be created across the Sunshine Coast.

The redevelopment of the Sunshine Coast’s CBD will create 30,000 jobs in Queensland between now and 2040, State Premier Annastacia Palaszczuk has claimed.

Furthermore, the project is expected to provide nearly $6 billion for the Queensland economy over a 20-year period, with $350 million added to the state’s coffers by 2020.

The SunCentral Maroochydore project aims to make the Sunshine Coast one of Queensland’s most important regional centres. Ms Palaszczuk added that the venture will help the area cope with population growth that is predicted across the region.

The Sunshine Coast population has risen from 65,000 to 335,800 over the last four decades, and experts believe there will be 500,000 people living in the region within the next 24 years.

The premier was at the development site on Thursday (February 11) to turn the first sod alongside SunCentral Maroochydore’s Chief Executive Officer John Knaggs.

According to SunCentral Maroochydore, the completed CBD will be a unique development that brings together urban design, innovation and technology. There will even be features that have never been seen before in Australia, including automatic waste collection facilities.

Creating jobs across the Sunshine Coast

Neither SunCentral nor the Queensland government have yet confirmed which types of jobs the project will create, although development of the CBD is likely to support workers in trades-related occupations.

This could also have a knock-on effect for apprenticeship opportunities in construction. With a range of retail and commercial buildings also scheduled for completion, apprenticeships and traineeships in a variety of industries could further benefit.

Ms Palaszczuk said the state government is proud to have generated jobs for 60,000 people over the last year, particularly as unemployment is currently at two-year lows.

She highlighted the importance of rising building approvals in the state, noting that the Sunshine Coast’s construction sector is booming. The region experienced its best final quarter building activity since 2011 in the three months between October and December last year.

Mr Knaggs said the Sunshine Coast has battled urban sprawl for decades and now is the time to consolidate the area’s future and provide a high-quality CBD.