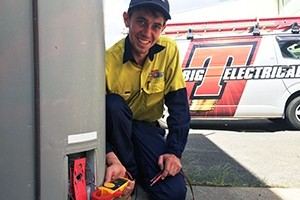 Nicholas is ready to take on the world’s best after winning gold at the WorldSkills Australia National Competition held in Melbourne earlier this month.

Twenty three year old Bundaberg local, Nicholas Lennox now has the world at his feet after taking out gold in the Electrical Installation section at the 2016 WorldSkills Australia National Competition held in Melbourne earlier this month.

Employed by Bundaberg company, Big T Electrical & Cooling, the fourth year apprentice is hoping he gets the chance to represent Australia at the 2017 WorldSkills International Competition in Abu Dhabi in the United Arab Emirates.

“I am now extremely keen to have the potential to compete at an international level next year and would be very keen to give it a go,” Nicholas enthused.

Big T Electrical & Cooling Business Manager, Elana Skinns said the company was extremely proud of Nicolas’s gold medal success and the achievements he has made during his apprenticeship.

“Nicholas was the first apprentice hired by Big T Electrical and from the very first day he has been a motivated and professional employee who has exceeded our expectations in terms of his talent and the skills he has achieved throughout his apprenticeship so far.”

“We operate as a small business with nine staff including three apprentices. Working within a smaller team allows us to provide one-on-one training to our apprentices and we see the benefits these personal relationships have in growing their knowledge and skills base.”

“Nicolas’s achievements confirm that our commitment and investment in the Queensland Apprenticeship program has been well worth it and it is great to see our effort in supporting young apprentices reciprocated. We congratulate Nicholas on his outstanding achievement and believe he has an excellent career ahead of him,” Ms Skinns said.

To win the WorldSkills Australia National Competition Nicholas was required to demonstrate his expertise in four competition categories covering aspects of speed, fault finding, programming and wiring. Following the completion of the three day competition, Nicholas finished almost five points clear of his closest competitor to take the gold medal.

If all goes according to plan Nicholas said he hopes to complete his apprenticeship (Certificate IV in Electrotechnology) by May next year.

If given the opportunity to compete, Nicholas said he would continue to hone his skills over the next few months in preparation for 2017 WorldSkills International Competition.

BUSY At Work, CEO Paul Miles said BUSY was pleased to be the Australian Apprenticeship Support Network (AASN) Provider for Big T Electrical & Cooling and delighted to have signed up Nicholas to his apprenticeship in 2013.

“We congratulate Nicholas on his outstanding success and know he has a great future ahead of him. As specialists in Australian Apprenticeships Support Services we are proud of our reputation and delighted that we have been able to support Nicholas in achieving his goals,”

“The continued growth of the WorldSkills competitions attests to the fact that traditional trade and newer technology vocations continue to make an important contribution to the social and economic well being of young Australians,” Mr Miles said.

WorldSkills Australia is a dynamic national organisation that has promoted the development, recognition and promotion of skills excellence in Australia since 1981. Competitions are held on a regional, national and international level, allowing young Australians the opportunity to showcase their trade and skill talent. Nearly 500 young apprentices, trainees and students participate in the event with all three levels of competition running biennially.