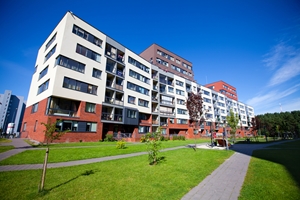 Both residential and commercial construction is on the rise in Queensland.

Confidence remains high among Queensland’s developers, as recent data reveals ongoing signs of strength in the state’s property market. Research published over the last month has shown both residential and commercial real estate appears to be enjoying a period of steady growth.

Sustained activity in the property sector often provides opportunities for construction jobs, which is likely to have a positive impact on employment levels and apprenticeships in Queensland.

Figures from the Australian Bureau of Statistics indicated Queensland was the only state to see a rise in building approvals in June. Over the last year, the number of properties given the green light jumped 15.9 per cent.

Treasurer Curtis Pitt said inner-city Brisbane, the Gold Coast and Brisbane South have been the primary drivers behind growth in the residential construction sector.

“In trend terms, a total of 3,694 dwellings were approved in Queensland in June 2015, with more than half of those for apartments, units and townhouses,” he stated.

“There has never been a better time to build in Queensland, with interest rates expected to stay low for a sustained period of time, and more attractive rental yields in Queensland’s south-east than in Sydney or Melbourne.”

Residential property projects are not the only area where more jobs in Queensland could arise; commercial real estate has also performed well in recent months.

The index, which measures confidence levels in commercial property, climbed six points to +11 over the three-month period to June. This is the highest score since the survey was first conducted more than five years ago.

“Positive returns are forecast for retail and industrial property in the next one to two years, with office rents to also resume growing modestly in two years’ time as excess supply begins to work out of the market, especially in Queensland,” he added.

The NAB index showed 46 per cent of developers in the country are looking to begin new residential projects over the next six months, while 39 per cent said the same about retail, office and industrial schemes.