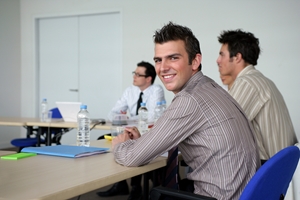 Traineeships and apprenticeships are key to the government's jobs agenda.

The Queensland government has released more details regarding the payroll tax rebate aimed at encouraging businesses to take on apprentices and trainees.

Queensland Treasurer Curtis Pitt said the newly elected Palaszczuk government is keen to get the initiative rolling so that unemployment issues in the state can be eased.

Mr Pitt added the government is “hitting the ground running” in its attempts to boost employment participation and deliver on its pre-election promises.

“During the first sitting of parliament we will introduce a bill to change the Payroll Tax Act so we can deliver our commitment to deliver a payroll tax rebate for employers when they hire an apprentice or trainee,” he stated.

“Our pledge of $45 million in payroll tax rebates will encourage employers to take on apprentices and trainees.”

According to Mr Pitt, a 25 per cent rebate will be paid on another worker’s salary once the organisation hires an apprentice or trainee.

“This will encourage greater participation and give young people a foot in the door when youth unemployment remains stubbornly high,” he explained.

Earlier this month, the Queensland government also claimed that 10 per cent of all workers on major state projects in the future will be apprentices and trainees.

The Palaszczuk government’s announcements may come as good news for those currently considering their career path, particularly those weighing up the advantages of on-the-job training.

Queensland’s unemployment rate stood at 6.5 per cent in trend terms, according to the latest Australian Bureau of Statistics figures. Data for youth unemployment is even higher at 14 per cent.

Mr Pitt said action must be taken to encourage more individuals into the workplace, with the number of unemployed people in Queensland jumping 30,300 over the last three years.

“We will see a direct employment benefit as a result of our payroll tax rebate policy. Queenslanders are one of our state’s greatest resources,” he added.

“We can harness this resource by setting the right policies for business and industry to create secure jobs and training opportunities.”

The payroll tax thresholds are currently among the most generous in the county, Mr Pitt claimed, with Queensland also boasting the lowest payroll tax rates.

The state government said it is eager to implement its employment agenda as quickly as possible, given that limited job opportunities have resulted in participation falling to 65.3 per cent in trend terms.