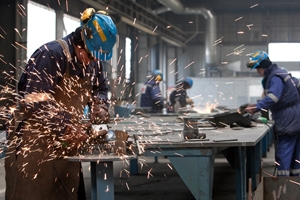 Apprentices in Queensland could be the first to benefit from a huge gas facility expansion.

A recent proposal to develop coal seam gas (CSG) operations across Queensland is tipped to deliver almost 2,000 positions for jobseekers across the state.

An expansion of production facilities by Santos GLNG would mean greater opportunities for apprenticeships and traineeships in Queensland, with both medium- and long-term jobs potentially on the horizon.

A Queensland Government media release said the expansion would provide new positions for 1,700 construction jobs during the initial building and installation stage, followed by 200 permanent mining positions once the expanded facilities are up and running.

Deputy Premier and Minister for State Development, Infrastructure and Planning Jeff Seeney said the proposal could prove to be a boon for permanent roles across the state, which would give employers better, more viable options when considering hiring apprentices.

“If the project goes ahead, it will provide considerable medium and long-term job opportunities for the region,” Mr Seeney explained.

The minister continued to explain the scale of development that could take place across the state if the proposal is approved.

“The proposed Santos GLNG Gas Field Development Project entails the progressive development of 35 petroleum tenements covering around 11,000 square kilometres in the south-west of the state,” he said.

“These tenements are located across areas in the vicinity of Roma, Wallumbilla, Miles, Surat, Wandoan, Taroom, Injune and Rolleston and could lead to about 6,000 production wells and necessary accompanying infrastructure being constructed progressively over the next 20 years.”

With expansion likely to take place across much of southern Queensland, it should be easier for jobseekers in this region to find local apprenticeship opportunities, should the proposal get the green light.

Local employers will be keen to add to their ranks quickly and effectively, and apprenticeships in construction and mining jobs will be a great way for them to do this, while also developing a workforce for the future.

Minister Seeney continued to say the expansion “must strike the right balance between the environment and existing land uses”.

The state government says consultation and a single assessment by the coordinator general will take place throughout the months of November and December and will be completed by the end of the year.