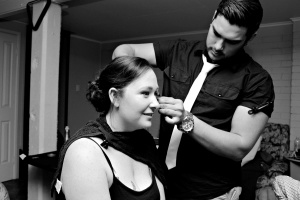 It was just two years ago, that former graduate of the QGC Strengthening Local Workforces Program, Robert Moore decided to take up the challenge and open his own hairdressing salon in the Central Queensland town of Biloela.

Since that time the 22 year old has proved to be not only a skilled hairdresser but an up and coming entrepreneur.

After completing his Certificate III in Hairdressing in Biloela, Robert moved to Brisbane to gain further experience before deciding to open Robbiiee Hairstyles in July 2014.

Such has been the success of the business that Robert now employs a first and second year apprentice to help run the salon.

“The salon has been going exceptionally well and I am really delighted with the great support I have received from the local community. Having the business has completely changed my life and given me the career I always wanted to have,” Mr Moore said.

Robert believes the QGC Strengthening Local Workforces Program which is a partnership between QGC and BUSY At Work, was the catalyst that gave him the confidence to move forward in his career.

The program was launched in February 2012 to match apprentices and trainees with businesses in regional Queensland areas such as the Western Downs, Gladstone, North Burnett and Banana regions while providing mentoring and coaching support to help boost retention and completion rates.

“The program provided me with great mentoring support as well as helping me develop my management and communication skills. Through the mentoring process I was able to work on the things I needed to improve on which gave me the confidence to start up my own salon.”

“It was wonderful to know that someone out there cared enough about my career and was willing to support me through it,” Robert said.

During the three year program, nearly 300 people have been placed in jobs in sectors such as health, hospitality, administration and automotive services with QGC having invested more than $3.5 million.

BUSY At Work CEO, Mr Paul Miles said that BUSY At Work was proud to have played an active role in the success of the program.

“Through his commitment and dedication to the program we have witnessed a very positive outcome not only for Robert but for the Biloela region as a whole,” Mr Miles said.

QGC Midstream Director Jeff Baillie said QGC was proud to have supported such an innovative program over the last three years.

“It’s great to see so many local people graduate with new skills thanks to the support of the businesses where they’ve done their training.”

This was one of many programs implemented as part of the QCLNG Social Impact Management Plan, which guided the natural gas project’s commitments to mitigating social impacts and enhancing benefits across the project area between 2011 and 2014. This was one of the most substantial private social investment programs in Queensland’s history with $150 million directed to community benefits.

IMAGE CAPTION: In just two year’s Robbiiee Hairstyles in Biloela has gone from strength to strength.