Thousands of new jobs in Queensland 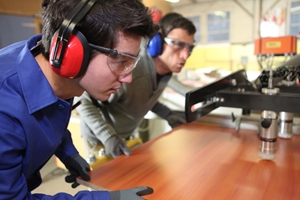 Queensland's four pillars will be reinforced with able apprentices adding value to the jobs market.

Good news for jobseekers and apprentices in Queensland: employment is on the rise, while unemployment has remained stable across the state.

The latest release from the Australian Bureau of Statistics (ABS) shows that the number of employed people has risen by 1 percentage point over the past 12 months. Meanwhile, unemployment across the country increased slightly over the same period, though remained stable in Queensland at 6.7 per cent.

While these figures seem small on paper, their effect in real terms is impressive, as the state government is now planning to release funds that will inspire job growth in some crucial industries.

In a media release this month, Queensland Treasurer Tim Nicholls said the state is gearing up to increase infrastructure spending, which will in turn create thousands of new career opportunities for employees and apprentices to find their way into the jobs market.

The state said its Strong Choices plan – an initiative to help financial distribution – will be a linchpin of this growth, as Mr Nicholls outlined the scale of the government’s growth forecast.

This will be attractive news for those looking to find an apprenticeship in Queensland. Employers can benefit from periods of stability by finding long term employees to take their business forward.

In particular, tourism, agriculture, resources and construction will all be targeted for growth, as the state government looks to further strengthen the four pillars of the Queensland economy.

This means a large amount of apprenticeships could be on offer in the coming months across a vast number of key industries – mining, farming, building, hospitality, among many others.

Securing jobs for the future

Mr Nicholls said Queensland is in a good position to continue to prosper, particularly with the long-term developments to infrastructure and jobs.

“We know more than 44,000 jobs (trend) have been created in Queensland since [2012]. We also know that Queensland’s economy is expected to grow at 6 per cent next year – which means thousands of new jobs and new income for Queenslanders,” the state treasurer continued.

With jobs in Queensland on the rise, it will be important to staff them in ways that prove sustainable, which apprenticeships and traineeships will be able to ensure.

To echo this point to employers, Mr Nicholls concluded: “We recognise there is much more work to be done to ensure everyone shares in the benefits of this growth.”