Tom Triumphs Thanks to Transition to Work

Looking for work can be a stressful time for anyone but particularly so when you are young, battling anxiety and depression and don’t have a great deal of prior work experience. 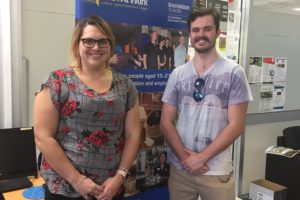 Tom is now employed and feeling positive about his future.

All of the above was the case for Tom when he first signed up with BUSY At Work and the Transition to Work program. Tom’s story is not uncommon for many young people who have left school and are struggling with health issues or personal hardships.

When Tom did recover from his health issues, he put everything he could into finding work, supported through the Transition to Work program.

“I was applying for plenty of jobs but it was hard not to feel down when I didn’t hear back or failed to get an interview”, Tom stated.

When a job became available with Woolworths, near Tom’s home, Felicia Daisy from BUSY At Work’s Transition to Work program assisted Tom with the online application process.

Everyone at BUSY was excited for Tom when he received a phone call to come in for an interview.

After the interview, Tom reported that it went well and he felt at ease with how welcoming the interviewers were.

A week later, he called the team at BUSY, ecstatic that he was offered the job.

“The team at BUSY kept me extra motivated and focussed during this period. They were lovely, thorough and very supportive and I can’t thank them enough!” Tom stated.

Felicia Daisy from BUSY At Work stated “We check in on Tom weekly and it’s amazing to watch his confidence grow. Since starting, his managers have increased his hours and say he is a quick learner. He’s a great guy and it makes our day to be able to support young people like Tom to get on their feet with stable employment”.

Paul Miles, Managing Director at BUSY At Work further stated “So many young people have the added burden of financial stress to contend with, apart from everything else that life is throwing at them. Programs like Transition to Work support young people to find a sense of purpose and stability through employment or further education”.

“We all had to start somewhere and we encourage all employers to give a young person a start in the work force. The team at BUSY can also advise on any incentives available to employers when hiring a young person”.

The Transition to Work program is an Australian Government initiative that provides youth employment services for young people who have left school early or are having difficulty entering employment after leaving school. The program provides career pathway support, relevant skills and other support to enter the workforce.

You can find out more about Transition to Work, or call BUSY At Work on 13 28 79