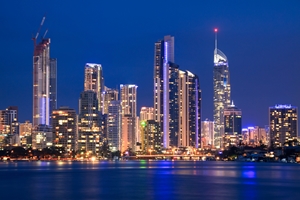 The Gold Coast will remain attractive to tourists and jobseekers.

Tourism and construction are two of Queensland’s most lucrative industries. While they’ve both offered plenty of jobs to people in the past, a new multi-million dollar project will see them combine to create a number of apprenticeship opportunities.

This latest project is further evidence Deloitte’s assertion that the Sunshine State’s economy is booming is correct. According to the firm, Queensland’s ongoing economic success is due to its ability to find what it does well and focus on that. The most recent report from Deloitte singles out tourism and construction as two industries that fall into this category.

With low interest rates and a low Australian dollar supporting construction and tourism respectively, the boom is set to continue.

For decades, the Gold Coast has been the sun-soaked jewel in Queensland’s ever-growing tourism crown. From amazing surf to theme parks that offer days worth of sun, there’s a reason it remains a favourite for both international and domestic tourists.

This excitement is about to be taken to the next level thanks to the announcement that two overseas firms have invested in an $850 million tourism development. The project will consist of a range of different structures, ensuring there’s plenty of work for the state’s construction apprentices. Premier Annastacia Palaszczuk described the extent of the project.

“I have previously welcomed plans by these three partners to build a 700-room hotel and apartment tower at Jupiters, and a live sports theatre, totalling up to $850 million,” she explained.

“However they have now signalled an even stronger intent by signing an [Memorandum of Understanding] for the tower plan as well as to pursue further potential development on Broadbeach Island.

As with most major projects, the development will encourage more than just labour hire in Queensland during the construction phase. While it’s expected to create up to 1,000 jobs while being built, the entire establishment is likely to support as many as 2,300 new roles once everything is up and running.

“In terms of the potential for future investment, we want to develop a range of attractions and a mix of accommodation types that will develop Jupiters as a truly integrated resort with entertainment and lifestyle precincts,” he explained.

The development means Queenslanders will continue to be able to bank on tourism and construction as viable industries for job creation.