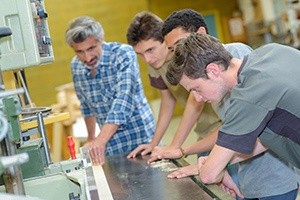 Figures released by the Australian Bureau of Statistics (ABS) today showed the Australian unemployment rate had a slight decrease (by less than 0.1 percentage points) to 5.6 per cent, in Australia for September 2016.

The fall in unemployment was driven by the drop in participation rate to 64.5 per cent. Despite unemployment falling the ABS estimates that 53,000 full-time jobs were lost in September with only 43,200 part-time jobs added.

“There are now 130,000 more persons working part-time than in December 2015, while the number working full-time has decreased by 54,100 persons” said Ms Jones.

AASN Provider, BUSY At Work CEO Paul Miles said he was concerned about the trend for part-time positions.

“It’s great that unemployment has fallen but we shouldn’t lose site that the number of full-time employed has continued to decrease while only being partially replaced with part-time jobs.

“The flow on effect is that we risk losing our skilled workforce and knowledge they have to pass on to our youth. This is why we at BUSY are strong advocates for Apprenticeships and Traineeships as they help provide a sustainable workforce for our future,” Mr Miles said.

More details are in the September 2016 issue of Labour Force, Australia (cat. no. 6202.0). In addition, further information, including regional labour market information, can be found in the upcoming September 2016 issue of Labour Force, Australia, Detailed – Electronic Delivery (cat. no. 6291.0.55.001), due for release on 27 October 2016.