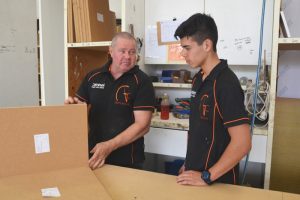 According to figures released by the Australian Bureau of Statistics (ABS) today, Australia’s unemployment rate is the lowest seen since March 2013 following an increase in employment during September.

The Bureau’s Chief Economist Bruce Hockman said the trend unemployment rate had been hovering in the range of 5.6 to 5.8 per cent for almost two years, but has now dropped to a four-year low of 5.5 per cent.

“Full-time employment has now increased by around 271,000 since September 2016, and makes up the majority of the 335,000 jobs net increase in employment over the period,” Mr Hockman said.

Queensland saw the strongest annual growth (trend) in employment over the past year with 4.1 per cent followed by Tasmania (3.9 per cent), Victoria (3.1 per cent) and Western Australia (2.9 per cent).

State Treasurer and Minister for Trade and Investment, Curtis Pitt, said the figures for Queensland show the government’s economic plan was on the right path, delivering jobs and strong growth in the state economy.

“The 5.9% [Queensland] trend unemployment rate is the lowest since November 2013 and the ABS figures show September was the 11th consecutive month to see a rise in net new jobs.

“Even Prime Minister Malcolm Turnbull recognised the strength of growth in jobs when he said on Brisbane radio last month: ‘It’s very important to be here in Queensland. This is the fastest jobs growth of anywhere in the country over the last year’.

“While we have more to do to create more jobs, especially in regional communities, our economic plan has already seen jobs up, our unemployment rate down, economic growth up, and business confidence up.

Employment Minister Grace Grace said the $177.5 million Back to Work jobs package was front and centre of the government’s efforts to support job creation.

“Back to Work has already supported more than 7,500 job seekers back into employment, and these numbers are growing by the day,” she said. “I’ve seen first-hand how the program is benefiting job seekers and employers throughout Queensland, while pumping millions of dollars into local economies.

“I say to eligible employers out there, if you’re thinking of hiring, get in touch with our local Back to Work team to put yourself in line for support payments of up to $20,000.”

“These latest figures are a great indication that our state economy is heading in the right direction.

“The government has some fantastic incentives to help small to medium size businesses and improve the unemployment level.

The Back to Work program gives direct support to employers for hiring unemployed job seekers and clearly this is proving to be a successful job creation investment.”

Mr Miles added that while Queensland’s growth was positive there was still plenty of room for improvement.

“We know that some businesses are doing it tough and our youth unemployment is still too high and we are here to help.”

“At BUSY we know it’s about real people in real jobs and apprenticeships and trades play a very important role in building our future,” said Mr Miles.

BUSY At Work delivers an array of employment programs on behalf of the government including Skilling Queenslanders for Work, Transition to Work, jobactive Employment Services and we are Queensland’s leading and longest standing Australian Apprenticeship Network Provider.

For further information about the ABS figures visit: www.abs.gov.au or the Back to Work ‘Youth Boost’ scheme.

More details are in the September 2017 issue of Labour Force, Australia (cat. no. 6202.0). In addition, further information, including regional labour market information, can be found in the upcoming September 2017 issue of Labour Force, Australia, Detailed – Electronic Delivery (cat. no. 6291.0.55.001), due for release on 26 October 2017.