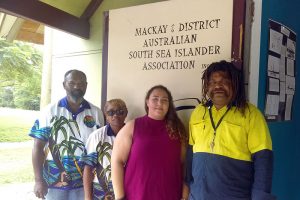 When Andersyn Landt started doing general cleaning and gardening at the Mackay and District Australian South Sea Islander Association (MADASSIA) centre as a participant in a Work for the Dole (WfD) activity, she never imagined it might lead to a possible future career in the administration field.

For Andersyn all that changed in February this year when the 20 year old Mackay local started work as a Trainee Business Administration Officer with MADASSIA.

“I never thought I would land a traineeship after my Work for the Dole placement but I am now learning lots of new business skills and working about 20 hours a week,” Andersyn enthused.

As well as developing her Microsoft Office skills and assisting with office clerical duties Andersyn is also studying for her Certificate III in Business Administration which she hopes to complete by the end of the year.

BUSY At Work, Work for the Dole Coordinator, Kristy Gostelow said Andersyn was a remarkable young woman who had taken on extra responsibility and “gone the extra mile” when required.

“Andersyn has demonstrated a great work ethic and is a really enterprising person. When the gardening activity finished she took the initiative to continue working at the centre and this has paid real dividends for her now,” Ms Gostelow said.

“We were looking for someone to do administration work for us and she stepped up by bringing in all the required paperwork while showing plenty of enthusiasm at the same time.”

“BUSY At Work has a done a great job assisting us to make it all come together for Andersyn, from enrolling her as a Work for the Dole participant to signing her up for a traineeship.”

“We know the staff very well at BUSY and they have made the process much easier for us.” Mr Vea Vea said.

A strong supporter of Work for the Dole, Starrett said the program was a great way to fulfil the needs of the wider community.

“It’s about getting young people working in a team, so that they are motivated to further develop their skills and experience.”

Last year, Starrett was part of a WfD project that helped uncover the unmarked graves of more than 100 South Sea Islanders in the Mackay Cemetery, revealing a lost chapter of the region’s history.

“We started MADASSIA in 1994 as a voice for the Australian South Sea Islander community, providing advice and access to vital services.”

“As descendants from South Sea Islanders we aim to preserve our cultural heritage and recognise the needs of Indigenous people.”

“We believe Work for the Dole is a great program and this is one of the many great outcomes I’ve seen during my time with MADASSIA,” Mr Vea Vea added.

BUSY At Work CEO, Paul Miles said BUSY was delighted to see Andersyn performing well in her traineeship with MADASSIA.

“We at BUSY are proud to play a part in people’s lives and careers and we wish Andersyn and MADASSIA well in their venture together.

BUSY At Work is the WfD Coordinator for the Mackay Employment Region.