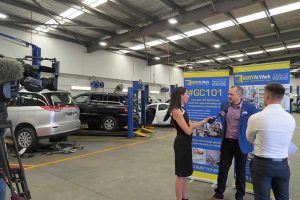 With Gold Coast’s youth unemployment sitting around 12% in November last year, leading provider of employment and apprenticeship services BUSY At Work was determined not to take it sitting down.

Embarking on one of its most ambitious employment campaigns to date #GC101, BUSY set a target of placing 101 Gold Coast Year 12 school leavers and youth into apprenticeships and traineeships by the end of 2016.

The result saw 105 school leavers and young people signed into apprenticeships and 279 school-based trainees and apprenticeships signed up, helping set them on their career pathway.

Minister Andrews has continued to drive the initiative in other locations around Australia, expanding BUSY At Work’s campaign success into other states including Gilmore in NSW south coast and Dunkley in Victoria’s Mornington region.

Gilmore set their target for 52 new apprenticeships and in less than two months have signed up 140. While Dunkley has a target of 100 in 60 days.

“I was proud to inform federal parliament this week of the success of the BUSY At Work GC101 campaign, which has led the way for other regions to follow,” Minister Andrews said.

“The campaign has been successful getting young people on the road to a rewarding job and career and importantly is also promoting the many opportunities available to Australians through an apprenticeship.”

BUSY At Work CEO, Paul Miles said he was thrilled to see other states and Apprenticeship Companies around Australia join the campaign to tackle youth unemployment.

“It’s fantastic to see jobs for youth being a priority throughout Australia and we started the ball rolling with our GC101 Campaign.

“Since November when the GC101 campaign started, youth unemployment has come down on the Gold Coast and while we can’t claim this directly we would like to think we have made an impact.

“Being strong advocates for apprenticeships and traineeships we encourage all apprenticeship companies and employers to get on board and give a young person the opportunity of a lifetime while also helping secure the economic future of Australia,” Mr Miles said.

While figures just released by the Australian Bureau of Statistics (ABS) today showed full-time employment increased by 7,000 in Australia in December there is still a shift over the past year towards part-time employment.

ABC reported that figures show an estimated 13,500 increase in jobs however these were driven by part-time work, with 44,800 full-time jobs lost in January.

The trend unemployment rate was 5.7 per cent for the ninth consecutive month and the trend participation rate was unchanged at 64.6 per cent.

Mr Miles said the part-time trend is inevitable in some industries, however in order to have a robust economy trades were the key to Australia staying at the forefront.

“Youth employment is our future and we must stay vigilant in our drive for trades and apprenticeships to ensure we maintain and grow a knowledgeable and skilled up workforce.

Mr Miles said BUSY will be launching their next apprenticeship campaign in North Queensland with our partner Skill360 in the very near future.

For further information about apprenticeships, traineeships or the Back to Work ‘Youth Boost’ scheme, please call 13 BUSY (13 28 79) or visit www.busyatwork.com.au