#GC101 on track to put 101 young Gold Coasters into apprenticeships 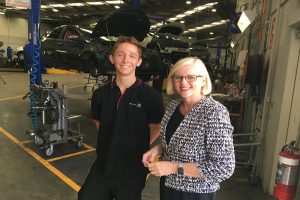 The ambitious #GC101 campaign to get 101 young people into an apprenticeship on the Gold Coast in less than two months is on the verge of reaching its goal.

Assistant Minister for Vocational Education and Training and local Federal Member Karen Andrews said the campaign is now just two short of its target with a week to go.

“99 young Gold Coast people are now on the path to a rewarding job and career through a variety of apprenticeships and we are very confident we’ll meet, and maybe exceed, our target of 101 by the end of the year,” Minister Andrews said.

“Full credit and thanks must go to all those Gold Coast employers who got on board and to Australian Apprenticeship Support Network provider, BUSY At Work, who coordinated the campaign.

“To see the looks of excitement on the faces of many of those young people who are now learning new skills to become highly valued employees has been very rewarding,” Minister Andrews said.

On top of the 99 new young apprentices, another 181 students have signed up to school-based traineeships so they’ll have the skills to go into jobs once they finish Year 12.

BUSY At Work CEO, Paul Miles, said the response from employers was fantastic, “We’re so pleased with the way the GC101 campaign has progressed and cannot thank Gold Coast employers enough for all their support.

“The Gold Coast has shown how it can be done and the success of this campaign is something we can look at doing nationally.

“The #GC101 campaign has not only helped tackle youth unemployment, it’s also helped raise the status and value of apprenticeships, which will provide the skilled workforce Australia needs to help grow our economy.”