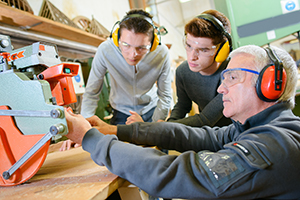 Queensland also saw the largest decrease in employment (down 11,500 jobs).

According to the bureau’s acting head of macroeconomics Jacqui Jones, there has been a relatively steady trend unemployment rate between 5.7 per cent and 5.8 per cent.

“Underemployment has remained steady, which returned to a record high of 8.7 per cent, first set August 2016”.

“The underemployment rate is still at a historically high level in Australia but has been relatively unchanged over the past two years,” said Mr Jones.

It is not all bad news however, as full-time employment increased by 27,100 jobs while part-time employment dropped off by 33,500 jobs. The labour force participation rate was unchanged at 64.6 per cent.

“This shift to part-time jobs is a growing trend and is very concerning for our trade industry sectors. For Australia to have a strong economy we need our small businesses to grow, youth unemployment to decrease and we need to build a skilled and knowledgeable workforce.

“As a leading Apprenticeship Network Provider we believe apprenticeships and traineeships play an extremely important role in achieving this and appeal to all the employers out there to get on board and take on an apprentice.

“Most apprenticeships can start as earlier as Year 10, so while these young people are still in school they are getting a real taste of employer expectations while learning. This not only helps them to be job ready once they finish school it also gives our employers an opportunity to employ someone that already has some great skillsets.

“A trade is also an excellent career option instead of university. While learning a trade the young person will earn while they learn,” Mr Miles said.

Now with the state Government’s Back to Work employment incentive including up to $20,000 youth boost*, this is a great time for Queensland’s regional businesses to get on board and employ an apprentice.

For further information about apprenticeships, traineeships or the Back to Work ‘Youth Boost’ scheme, please call 13 BUSY (13 28 79) or visit www.busyatwork.com.au
end

Source: More details are in the February 2017 issue of Labour Force, Australia (cat. no. 6202.0). In addition, further information, including regional labour market information, can be found in the upcoming February 2017 issue of Labour Force, Australia, Detailed – Electronic Delivery (cat. no. 6291.0.55.001), due for release on 23 March 2017. Labour Force, Australia, Detailed, Quarterly (cat. no. 6291.0.55.003), which includes employment by industry, is also due for release on 23 March. These publications are available for free download (after release) from the ABS website: www.abs.gov.au.
http://www.abc.net.au/news/2017-03-16/abs-employment-jobs-data-february/8359312
*eligibility requirements.