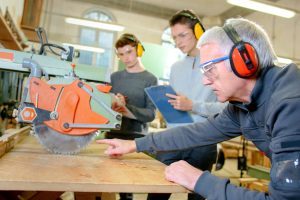 Figures released by the Australian Bureau of Statistics (ABS) today revealed unemployment rate remained steady at 5.6 per cent. The participation rate decreased by 0.1 percentage points to 64.5 per cent.

Australian Apprenticeship Support Network Provider, BUSY At Work CEO Paul Miles said while an increase in part-time employment is inevitable due to our workforce and lifestyle trends we mustn’t lose sight of the benefits of having full-time employment.

“We are strong advocates for Apprenticeships and Traineeships as they help provide a sustainable workforce for our future.”

“Apprenticeships provide a solid career path and a commitment to the employer while they earn and learn. There are over 600 qualifications to choose from in the various trades which can help increase productivity and reduce staff turnover,” Mr Miles said.

Australian Apprenticeships and Traineeships offer anyone of working age the opportunity to train, study and earn an income in a wide range of occupations and trades. An apprentice can be a school-leaver, a person re-entering the workforce or an adult worker simply wishing to change careers. You can even employ apprentices or trainees part-time while they are still at high school through a School-based Apprenticeship or Traineeship.

Source:
More details are in the October 2016 issue of Labour Force, Australia (cat. no. 6202.0). In addition, further information, including regional labour market information, can be found in the upcoming October 2016 issue of Labour Force, Australia, Detailed – Electronic Delivery (cat. no. 6291.0.55.001), due for release on 24 November 2016.
These publications are available for free download (after release) from the ABS website: http://www.abs.gov.au.