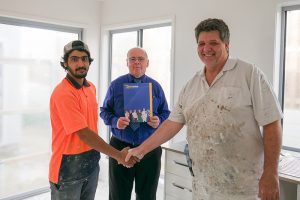 The former Redbank Plains High School student began his Painting and Decorating apprenticeship in early June after a long period of unemployment.

With the support of BUSY At Work and Challenge Employment and Training Justin is now focused on pursuing a working career in a field he really enjoys.

Early this year Justin completed a Skilling Queenslanders for Work (SQW) Inala Construction through Challenge Employment, which included a Certificate I in Construction. The training, funded by the Queensland Government, allows participants to gain an understanding of the building industry as well as obtain a White Card (General Safety Induction).

“We have been looking after GMP Painters for a number of years now and they were having difficulty finding someone to fill an apprenticeship role.”

“Through our contacts with Challenge Employment and Training, we were able to market Justin to the company and after a couple of days of work experience Justin was signed up to his Certificate III in Painting and Decorating.”

“Justin has shown plenty of commitment to his trade and is now keen to build a new chapter in his life,” Mr Olssen said.

Challenge Employment and Training CEO Richard Lindner said he was pleased the SQW program had helped Justin in his career pathway.

“I am so happy that our Skilling Queenslanders for Work Certificate 1 in Construction program has provided Justin with the skills to secure his apprenticeship.

“It’s great that our Transition to Work team could find the job for Justin but it was eventually up to him to prove himself to his employer, great work Justin,” said Mr Lindner.

Since joining GMP Painters early last month Justin said he had been kept busy learning how to prepare walls for sanding and gapping as well as learning techniques in how to brush and roll walls.

“I’m really excited to have this job and I enjoy being busy and learning new things. Everyone has been giving me lots of helpful tips and willing to pass on their knowledge. I am very thankful to be given this opportunity,” Justin said.

“Justin has picked up things really well and he has a very good attitude towards his work. That’s the most important thing for me. Skills can be taught but attitude you can’t train.”

“Having completed the Certificate I in Construction beforehand has given him a good leg up and he has a good understanding of safety and what is required on a worksite,” Mr Pearce said.

Glen said Justin had shown commitment and a willingness to learn on the job.

“We are confident in his ability and are keen for him to complete his apprenticeship with our company,” Mr Pearce added.

BUSY At Work, CEO Paul Miles said BUSY was pleased to support local employers who were willing to give young people like Justin an opportunity to gain a trade.

“At BUSY At Work we know how difficult it can be for unemployed job seekers to adapt to a new working environment. Justin has shown himself to be very capable and demonstrated that he is able to perform at a high level.”

“With the right training and mentoring he will make a valuable contribution not only to his employer but to the painting trade as a whole,” Mr Miles said.