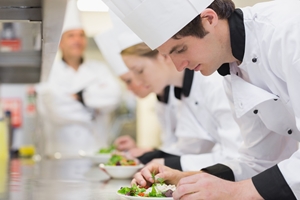 Food services have created a number of roles over the last year.

Queensland’s economic growth has been closely tied to the resources industry in recent years, but non-mining sectors are beginning to provide more support.

A new St George Bank report highlighted various employment opportunities in the state, with 34,300 new jobs created in the 12 months to January 2015.

People pursuing traineeships in Queensland may be encouraged to hear hospitality positions could also be high in demand soon, with consumer spending on hotels, cafes and restaurants climbing 9.3 per cent in the year to September 2014.

While three major LNG projects are set to finish in 2015, Queensland’s real estate and tourism sectors are expected to offset some of these losses. A drop in the Australia dollar and current record-low interest rates will continue to facilitate growth in these industries.

“There are also major transport projects supported by the public sector. These include the $1.7 billion ‘Legacy Way’ project and the $1.1 billion Morton Bay Rail link,” the report said.

“There will also [be] the ongoing infrastructure construction required for the 2018 Gold Coast Commonwealth Games.”

Despite a recent drop in mining and building work, these two sectors remain the heavyweights of Queensland industry.

Construction is responsible for 11.4 per cent of the economy’s gross value, while resources contribute 10.8 per cent. Health care and manufacturing come third and fourth respectively with 8.3 and 7.2 per cent.

“In Queensland, major LNG projects have been propping up economic activity. These include the $24.7 billion Australia Pacific LNG project, the $20 billion Curtis Island LNG project and the $16 billion Santos project off Gladstone,” the report added.

Once these are complete, the exports produced at the sites are expected to be a key driver of growth over the coming years. However, St George said LNG prices could suffer the knock-on effect of low oil values.

Coking coal, Queensland’s second major export, remains stable following a sharp decline last year. A number of unprofitable mines have closed, but this has been overshadowed by new production at other projects.