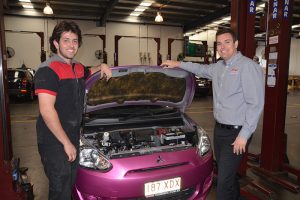 First year motor mechanic apprentice Silvio De Vito has learnt a lot during the past year.

After securing an apprenticeship with Von Bibra Auto Village, Robina during BUSY At Work’s GC101 campaign last year, Silvio is keen to play a role in this year’s campaign.

Now one of six inaugural ambassadors for GC101, Silvio is excited to be pursuing a career he is passionate about.

Since starting his Certificate III in Light Vehicle Mechanical Technology, Silvio has been kept busy learning how to do basic servicing, wheel alignments and tyre repairs under the watchful eye of a senior technician.

“I’ve always been interested in cars since I was a young kid. I love having the opportunity to get on the tools early and being hands-on in a physical role.”

“There’s always a feeling of satisfaction when the customer drives away in a car that you’ve helped to maintain or repair. It’s like they’re showcasing your skills and hard work,” Silvio said.

While just starting out in his career, Silvio has set his sights high for the future.

“The motor industry is definitely where I want to be and I would love to work in a high end Porsche or Mercedes dealership in the long term,” Silvio said.

Having gained a lot of confidence since starting his apprenticeship Silvio was happy to come on board as an Ambassador for BUSY At Work’s new GC101 campaign to help promote apprenticeships for those wanting to work in the trades.

“We are the next generation of people to join the workforce and the more young people we employ who are willing to learn and work hard, the better our future will be,” Silvio added.

“Our inaugural campaign last year was a great success and we are once again committed to getting 101 school leavers and young people who have recently left school into apprenticeships and traineeships before the end of the year.”

“Last year we signed up 105 school leavers and young people into apprenticeships. As well as this we were able to sign up 279 school-based trainees and apprentices during the six week campaign.”

“As a leading provider of employment and apprenticeship services we want to encourage all local companies and employers to get on board and set a young person on the road to a rewarding career through an apprenticeship or traineeship,” Mr Larney said.

“We have been working with BUSY At Work for the past 15 years in signing up apprentices and trainees and are fully supportive of this campaign.”

“It’s a great way to get school leavers involved and help them achieve their full potential,” Mr Schultz said.

David said Von Bibra provided great career opportunities across their business not only in the automotive trades but also in administration and sales roles.

“We employ nearly 500 people across seven Gold Coast franchises and many of our young apprentices have gone on to have successful careers as automotive technicians and in sales and management roles,” Mr Schultz added.

BUSY At Work, Managing Director Paul Miles urged all Gold Coast businesses to come on board and take advantage of the new GC101 Apprenticeship campaign.

“We are committed to bringing youth unemployment down on the Gold Coast and we are encouraging all local businesses to get behind this campaign and take on a new apprentice or trainee.”

“With a proud reputation as specialists in apprenticeship support services, BUSY At Work are ready to make employing an apprentice as easy and efficient as possible,” Mr Miles said.