Australian employers are looking to hire 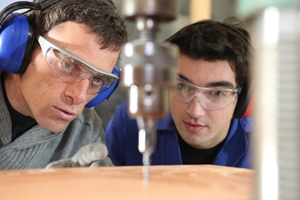 Is your business ready to take on a new apprentice?

According to the latest study from Manpower Group, employment intentions were up across the country for the third quarter of 2014.

The Employment Outlook Survey found that 20 per cent of employers intend to add staff in this quarter, compared to 12 per cent who were planing on reducing their staff numbers.

As a result, the net employment outlook (percentage hiring staff minus percentage reducing staff) stood at nine per cent, up three percentage points on a year ago.

Queensland has seen some of the strongest growth in employment intentions. According to the survey, Queensland was roughly even with New South Wales, Victoria and Western Australia. The state has also recorded much stronger growth than the ACT, South Australia and Tasmania.

The Queensland area is also reporting greater forecasts compared to this time last year. In the third quarter of 2013, demand for new employees was two percentage points lower, pointing to a long term growth in employment for the state.

Some industries better than others

While the overall outlook is good for Australian job hunters, there are still issues present within the labour force. For manufacturing, mining and utilities the outlook is strong, with many employers looking to add new staff.

In contrast, education and public administration had the lowest employment outlook with only slightly more employers expecting to find new staff. This sector has declined by three percent in the last year.

Time right to hire an apprentice

With such strong employment intentions among companies, now might be a good time to consider hiring an apprentice.

Taking on an apprentice gives you an opportunity to direct the study of a new employee, making sure that they are reaching the skill levels needed for your business.

With a strong apprentice support system in place you can also set up an employee for a long career with your company. Training an apprentice in your business processes can make them more valuable for your firm and ensure that you have an ongoing skill set for your business.

If you are interested in taking on new staff, it pays to consult with a dedicated apprenticeship coordinator. They will be able to guide you through the process of taking on an apprenticeship.