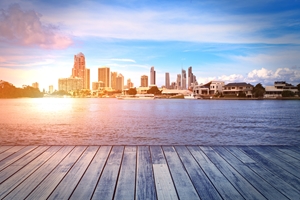 The Gold Coast is a popular tourism destination in Queensland.

Australia’s tourism industry is expected to provide significant revenues for the national economy over the next five years, and Queensland is a notable contributor.

Premier Annastacia Palaszczuk said 2.3 million international tourists visited the state over the 12-month period, with a 9 per cent jump in total overnight stays recorded. She said these trends are encouraging for jobs in Queensland.

“These results show that not only are we attracting more visitors, they are spending more while they are here – and that’s great news for regional communities and jobs,” she explained.

Kate Jones, Tourism Minister for Queensland, said China is the state’s most lucrative market, both in terms of size and pace of growth. The Asian nation’s expenditure in Queensland climbed 45 per cent to $854 million during the year.

“Overall, 14 of Queensland’s top 20 international markets recorded increases in overnight visitor expenditure, with the US (up 23 per cent), the UK (up 8 per cent) and New Zealand (up 3 per cent) all recording growth,” she added.

Recent forecasts from IBISWorld predicted Australia’s tourism industry will be worth $129 billion by 2020-21, up from $118 billion this year. Increased traffic from Asia and a weaker Australian dollar are expected to drive the growth.

Momentum in the country’s tourism is likely to have a positive impact on jobs, with 543,000 people already employed in the industry. As a result, tourism traineeships in Queensland could become more popular, with organisations looking to build a strong talent pipeline for the future.

Ms Jones said 10 of the state’s eleven regions experienced a rise in international visitors, with people from overseas spending 21 per cent more in the year to September than the previous 12-month period. This elevated the capital’s tourism expenditure to $1.9 billion.

“Similarly, the Gold Coast continues to build its ‘famous for fun’ reputation with 10 per cent growth and a record $1.1 billion in expenditure. The Gold Coast’s total visitation grew by six per cent to 872,000,” she explained.

Meanwhile, Tropical North Queensland saw an 8 per cent rise in money spent, which brought the region’s total to $986 million for the year. Visitor numbers also increased 4 per cent.