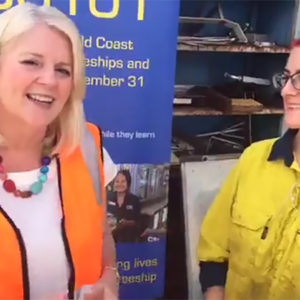 BUSY At Work Combat Youth Unemployment with Army of Apprentices

Gold Coast based organisation BUSY At Work has helped to combat the challenge of youth unemployment on the Gold Coast by unleashing an army of 111 apprentices and trainees into the workforce.

Anika Finds Her Passion in Fitting and Turning

Since starting her apprenticeship in December last year, Anika has been kept busy carrying out repair work on community playground equipment as well as learning how to change bushes and bearings and develop her hand skills in MIG and TIG welding.

Late last year 18 year old Harry Brickles began to seriously contemplate what career path he wanted to follow for the rest of his life. Having just finished Year 12, Harry’s school results could have given him direct entry into university but instead he decided to follow his passion and secure an automotive light vehicle apprenticeship during BUSY At Work’s GC101 campaign. Now twelve months into his apprenticeship with Grand Motors at Southport, Harry is keen to play a key role as one of six inaugural ambassadors for thi

Max Ready To Cook Up a Storm For New GC101 Campaign

As the latest ambassador for BUSY At Work’s GC101 campaign, Max Hall has always had a passion for food so it’s not surprising to hear him talking enthusiastically about where this passion might take him in the future. “With cooking you learn so many things you can take into your everyday life. When you get home from work it’s reassuring to know that you have the skills to cook something really nice.” “You can have small family dinners where you can cook for everyone and they all really appreciate the hard work yo

First year motor mechanic apprentice Silvio De Vito has learnt a lot during the past year. After securing an apprenticeship with Von Bibra Auto Village, Robina during BUSY At Work’s GC101 campaign last year, Silvio is keen to play a role in this year’s campaign.

Elloyse Cuts Out A New Career in The Hairdressing Industry

Elloyse Eldridge has always demonstrated a natural flair for hairdressing and making people feel good about themselves. The bubbly seventeen year old who recently signed up as ambassador for BUSY At Work’s GC101 campaign has fitted in very well at the Next International salon at Oxenford.

With Gold Coast’s youth unemployment sitting around 12% in November last year, leading provider of employment and apprenticeship services BUSY At Work was determined not to take it sitting down. BUSY joined forces with Assistant Minister for Vocational Education and Training and local Federal Member Karen Andrews to call on Gold Coast employers to help resolve this growing trend. Embarking

#GC101 on track to put 101 young Gold Coasters into apprenticeships

The ambitious #GC101 campaign to get 101 young people into an apprenticeship on the Gold Coast in less than two months is on the verge of reaching its goal.

In one of the most ambitious youth employment campaigns ever undertaken on the Gold Coast, BUSY At Work has set itself a target of placing 101 Gold Coast Year 12 school leavers and youth into apprenticeships and traineeships in six weeks. The GC101 Apprenticeship campaign was launched today by Federal Assistant Minister for Vocational Education and Skills and Federal Member for McPherson, the Hon Karen Andrews MP.